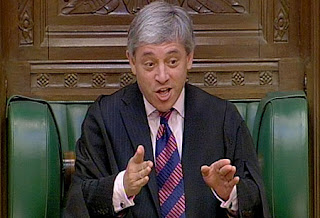 The final revenge of the Labour Party after Michael Martin resigned as Speaker of the House of Commons was putting their support behind John Bercow, the Tory MP.

Tory MP John Bercow wasn’t popular and his star was falling from grace.

It was classic wickedness on the part of the Labour Party, the old two finger salute.

Funny stuff to be sure!

So, at Westminster we have the odd situation of a mini war between the Speaker and the Tories, it is still at the loud verbal stage.

Although I am sure that plotters are waiting in the wings.

The role of Speaker is a balancing act and we have been lucky and unlucky in the past.

For example, the Gold Standard was Betty Boothroyd who was quietly simply perfect for the difficult role.

And unluckily, we had Michael Martin who showed that he was incapable, on one occasion, he conducted a personal argument while in the chair.

He left and Bercow was transplanted by the Labour Party.

I thought he was a mistake but you have to give people a chance despite any doubts you might have, let people stand or fall on merit.

But things have not gone well for John Bercow as a running feud appears to exist between him and his fellow Tories.

Such behaviour should have been stamped out by David Cameron and Tory bosses but it has been allowed to fester and grow.

This further brings down the reputation of Parliament.

The latest is an incident between Tory MP Mark Pritchard and John Bercow.

Today saw an ugly situation arise as he exploded when the Commons Speaker confronted him over an alleged breach of the courtesies of the House.

It all started when Pritchard got to his feet towards the end of Business Questions.

As Pritchard rose, he was told by John Bercow that as he was not present for the beginning of Sir George Young's business statement, he could not ask a question.

This made Pritchard furious because he actually had been present for the start of the session at 11.30am.

And had witnesses, Des Swaine and Peter Bone!

His problem was that he had nipped out to use the toilet for five minutes between noon and 12.05, before returning.
You can understand his annoyance.

To register his anger at not being allowed to ask a question, Pritchard immediately wrote a letter of complaint, explaining why the Speaker was wrong (including the toilet break). He went to the Speaker's office to submit the letter.

All fine and good!

What followed later was a mistake on his part as he walked back along the corridor behind the Speaker's chair.

He encountered Mr Bercow walking towards him with his usual formal entourage.

The Speaker then stopped and pointed at Pritchard and said:

"The courtesy of the House is that Honourable Members should stand aside when the Speaker passes by".

This was the red rag to a bull that blew his stack.

Pritchard was so outraged at this further slight that he replied:

"Mr Speaker, don't point at me. I am not here to be abused by you."

Bercow countered:
"You will obey the courtesies of the House!"

To which Pritchard replied with the immortal line:

"You are not fucking royalty, Mr Speaker!"

Pritchard then walked off.

It was high drama and witnessed by several colleagues.

Pritchard had a legitimate complaint but he allowed his temper to get the better of him.

It therefore should fall on him to make an apology to the House and the Speaker.

Why, because the processes of Parliament are important, he may not like the man but he should respect the position.

And Tory bosses should be having a word that behaviour towards the Speaker should be of an acceptable level that they themselves would expect as a matter of course.

George Laird
The Campaign for Human Rights at Glasgow University
Posted by G Laird at 7:08 PM

I'm Royalty and so is my husband.