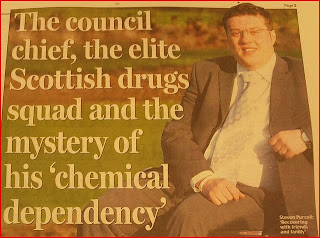 Steven ‘bin laden’ Purcell was once head of the Glasgow Labour Council of shame.

He went from Labour ‘hero’ to zero in such a dramatic turn of events.

The Glasgow Labour Party Mafia was publicly exposed as Steven ‘bin laden’ Purcell and his cocaine habit and allegations of cronyism spilled out into the press.

After an interview in The Sun newspaper where he admitted cocaine use he fled the city.

Well you would do in his situation; Strathclyde Police wanted a word in his shell like ear.

Running away till the heat died down, Purcell sneaked back into the city, handed in the keys to the throne and disappeared.

He still saw himself as man of influence.

But he hadn’t reckoned on the Glasgow Labour Mafia.

Omertà is the Mafia code in the Glasgow Labour Council of shame.

Gordon ‘free dinners’ Matheson was chosen as the new ‘Don’ or Godfather and soon executed the night of the long butter knives.

Purcell henchmen and women were removed and ‘free dinners’ installed his pals.

And the Glasgow Labour Party Mafia has a long memory.

That is why Glasgow City Council of shame has pulled out of involvement with a new organisation, SIBO.

They discovered that shamed former leader Steven Purcell was involved with it.

After spending time abroad, Purcell set up a limited company called Twenty Ten Consultancy in June thinking he could still weald the power of influence and contacts.

For him it seems the Labour network isn’t working, access cancelled, privileges revoked.

Purcell in a business capacity has been helping promote an Indian business group launched by controversial businessman Sohan Singh.

The Labour Council of shame was onboard for the new group but when they found Purcell involvement the local authority distanced itself from the venture.

Glasgow Labour Mafia seem to be of the opinion, that they won’t be doing business anytime soon with Purcell.

He brought officers from the Scottish Crime and Drugs Enforcement Agency to the ‘Halls of Infamy’, the City Chambers.

You stick in the arms-length organisations he set up which were denounced as cronyism with Labour Placemen and women raking in high salaries.

It is easy to see why ‘free dinners’ wants the ‘Curse of Purcell’ excised, there is no return from the political wilderness, not in an election year at least.

Steven ‘bin laden’ Purcell had it all, a career and a future, now that is all gone.

He made many Labour people rich in ALEOs but found that when he wanted back at the trough, there was no room.

George Laird
The Campaign for Human Rights at Glasgow University
Posted by G Laird at 3:51 PM

Hi, after reading this awesome post i am as well delighted to
share my experience here with colleagues.

After exploring a number of the blog posts on your
website, I really appreciate your way of writing a blog. I book-marked it to my bookmark webpage list
and will be checking back in the near future. Please visit
my website as well and tell me how you feel.

If you would like to grow your know-how only keep visiting this web
site and be updated with the most recent gossip posted here.