Asylum seeker who killed girl in hit and run 'should be deported', says Tory immigration minister, there is a pressing need to fix ECHR now! 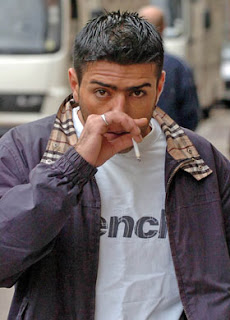 A person getting killed in a car crash is a terrible and devastating event for any family to have to endure.

An added dimension is when a child is involved.

Aso Mohammed Ibrahim knocked down Amy Houston, 12, and fled the scene leaving her under the wheels of his car.

The father of the little girl has been campaigning for Aso Mohammed Ibrahim, a failed asylum seeker to be deported.

Bad enough to hit the little girl but leaving her and fleeing the scene is despicable and beneath contempt.

He was arrested and served only four months in prison.

Last year he fought against deportation arguing sending him home would breach his right to a 'private and family life' under the Human Rights Act.

He has fathered two children here.

Should Aso Mohammed Ibrahim be deported?

To answer that question, you have to look at the Human Rights Act.

Does the Act in all circumstances circumvent the law?

The answer is no.

The state has a right to protect public safety.

Human rights are there to ensure fairness, equal treatment and justice.

Did Amy Houston get fairness, equal treatment and justice when Ibrahim got four months in prison?

Ibrahim claimed he had a right to a 'private and family life' under the Human Rights Act, if this was always the case, prisons would be empty.

Will Tommy Sheridan claim his right to a 'private and family life' in six days time in Court, probably not because the state is probably going to exercise their right via the Judge to slam him up!

Paul Houston, Amy’s father has continued to campaign for Ibrahim to be deported claiming the Act had become nothing more than a charter for thieves, killers, terrorists and illegal immigrants.

He has been handed fresh hope after his campaign was backed by immigration minister Damian Green.

In a letter to Mr Houston, the immigration minister said:

“I agree that Mr Ibrahim should not be allowed to remain in the United Kingdom. Mr Ibrahim was convicted of committing an offence that led to the tragic death of Amy Houston and it is my personal view that he should be removed.”

The Human Rights Act 1998 needs fixed, but more than this the European Convention on Human Rights needs to be revisited.

Tories as an election ploy said that they would repeal the Human Rights Act and replace it with a British Bill of Rights.

That was a personal pledge by David Cameron but it was also a con.

Simply put, this is a matter that needs to go to Europe for a solution.

The Human Rights Act needs fixed but more than that, the people who make judgements using it need to be better trained to understand what human rights are.

The UK State has the right to restrict travel of its own citizens in cases of football hooligans; it therefore should also have the right to deport people who break our laws.

Aso Mohammed Ibrahim should be put on a plane and deported for leaving Amy Houston to die under the wheels of a car without trying to help her.

And it should be banned for life.

George Laird
The Campaign for Human Rights at Glasgow University
Posted by G Laird at 7:09 PM

Hmm good article but with regard to Mr Sherridan he has been a serial shagger for a long time , I have it second hand.

He should have just told the newspapers his sex life was a matter between him and his wife rather than like a demented monkey in a post box pull a pin from a grenade and then proceed to try to stick it back in , in the dark, blindfolded.

He isnt going to do porridge for being a gobshite , he would have been banged up long ago if that was a crime, he was an MSP and should have known that lying in court isnt really on,. unless you make it to be a government minister