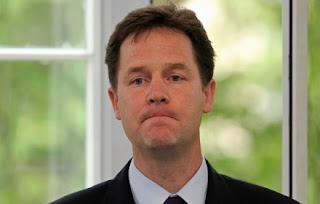 It’s D- Day at the Oldham East and Saddleworth by-election.

Now, it is time to see the price of treachery as Quisling Nick Clegg braces for another blow to his inept leadership.

The polls are open and people will definitely be heading to ensure that they get the boot in Clegg via the ballot box.

This is the first test of Mr Clegg's authority since he joined the Coalition of the damned and shelved key Lib Dem policies.

Although the Labour Party is expected to emerge the comfortable winner, they don’t have anything to celebrate but will give the appearance that they fought an epic battle.

Expect someone spanner to say, it was ‘historic’, a Labour Party buzzword done to death.

Defeat is certain for Clegg and represents another setback which gives ammo for those in the Lib Dems who know the longer Clegg ties them to the Tories the worse it will get.

So, what are we looking for?

What is the story, the gap between the Labour Party and Lib Dems.

The Tories have acted in a shameful way by not fighting the seat; they let their candidate down badly.

So, Oldham East and Saddleworth isn’t a true contest in the traditional sense.

David Cameron has been forced to deny running a half-hearted campaign in a bid to prop up his beleaguered coalition partner Mr Clegg.

No Tory MPs were instructed to turn up and campaign, highly unusual behaviour.

The Tories have gone with Operation ‘Save a Quisling’ to shore Clegg’s authority against his own party.

New Labour leader Ed Miliband is desperate for a win to try and keep his flagging leadership afloat.

He isn’t leader material, he is a caretaker; David Miliband was the best candidate out of a pretty poor list of candidates.

The worst was Diane Abbott, the joke candidate who was tanked.

Last May, the Oldham seat went Labour by just 103 votes ahead of the Lib Dems.

It should go Labour again but the real story isn’t who gets elected but the collapse of the Lib Dem vote.

Nick Clegg needs a good result because his leadership is at stake, it won’t be the end of it but it will be seen as the start of the beginning of the end.

The by-election result is expected to be declared in the early hours of tomorrow morning and Britain waits.

George Laird
The Campaign for Human Rights at Glasgow University
Posted by G Laird at 5:45 PM