Tommy Sheridan in phone hacking legal bid against the NOTW, he is seeking ‘the truth’, I thought he was seeking damages and leverage! 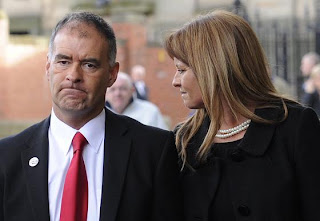 You may have notice there is a cold wind blowing about Scotland, very nasty indeed.

In the High Court of Glasgow before Xmas Tommy Sheridan felt a different type of cold, a chill verdict!

Granted bail instead of jail at present he returns to Court on 26th January to learn his fate.

And the general consensus is that he is looking at a length stay in prison unless Lord Bracadale is in a charitable mood.

So, Tommy Sheridan is getting his affairs in order and money must weigh heavily on his mind at present.

The NOTW is looking to take more of him in the shape of cash as it is said to want to recover its costs from him.

In an rearguard action so to speak, Tommy Sheridan is to take legal action against Scotland Yard and the News of the World to find out, “in the public interest”, how a private investigator acquired his personal details, including a home address and mobile telephone number.

The News of the World is at the centre of a phone hacking scandal, the Sienna Miller case is a lightening rod at present, assistant editor Ian Edmondson a high ranking journalist has been suspended by the NOTW.

You could say that the phone hacking creates a real problem for David Cameron and his media chief, Andy Coulson.

Coulson ran the paper and says he didn’t know such wickedness was happening.

For the Labour Party, this is a gift as they call for the Metropolitan Police to reopen its probe into the phone hacking controversy saying it was getting “closer and closer” to Downing Street.

Back to Sheridan, his solicitor, Aamer Anwar says he has been instructed by his client to begin legal proceedings for breach of privacy.

At the centre of that is Glenn Mulcaire, the private investigator hired by the News of the World, was able to get the former Scottish Socialist Party leader’s personal details.

The first two maybe explained away but not the pin codes which were found in two of Mulcaire’s notebooks during a police raid four years ago.

Scotland Yard it seems wasn't too interested in informing the victims, which begs the question, why?
Although the documents came to light after a Court forced the Police to disclose them, does alleged allegations of wickedness at the NOTW help Sheridan in his case?

Not really unless he can link that to the videotape!

Their actions don’t excuse Sheridan’s actions, he was found guilty by a jury based on the evidence of several witnesses, videotape and other evidence.

“Mr Sheridan wants to know who instructed the hacking, why wasn’t there a full and transparent investigation by the Metropolitan Police and why wasn’t he informed.” It wasn’t just one occasion; it’s two separate occasions. This won’t be an action for damages; it’s an action to find out what went on.”

“It’s in the public interest to know exactly what’s been going on at the News of the World.”

I would agree it is in the public interest but I have difficulty in seeing how anyone would think this is a lifeline for Sheridan unless he can link people to that videotape.

It maybe a cash cow!

Claims of phone hacking formed a key part in the ex-MSP’s perjury trial but them spying on Sheridan could possibly be argued under the Data Protection Act 1998, in which evidence maybe collected if the person believes it is in the interest of crime prevention.

But phone hacking isn't covered by that clause however, you can't commit a crime to detect a crime.

“I don’t accept there was a culture of phone hacking at the News of the World. There was a very unfortunate, to put it mildly, case involving Clive Goodman. No-one was more sorry about it than me; that’s why I resigned.”

Now, the spotlight turns onto assistant editor Ian Edmondson, perhaps there maybe a criminal investigation into whether Andy Coulson perjured himself while on the stand at the Tommy Sheridan case?

Sheridan says he is innocent and the videotape is a fake but despite this the issue of the witnesses who gave evidence of what he says still stands and he can do nothing against that.

Perhaps Sheridan thinks if he does enough muck raking then he might be spared prison and the NOTW will do a deal leaving him alone financially.

To me that would seem to be the best of a bad situation.

Then there is the issue of the Tommy Sheridan Appeal in which he will present a case that his trial was unfair so that the verdict can be quashed.
One thing certain, the Tommy Sheridan Case still has a lot of life left in it yet and is far from over.

But what he really needs is some kind of damning evidence that can prove the videotape is a fake.

George Laird
The Campaign for Human Rights at Glasgow University
Posted by G Laird at 3:00 PM