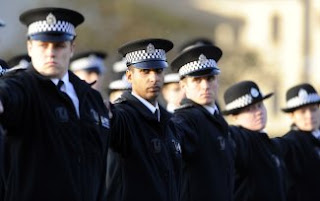 The Scottish Government is going to back merging the country's police into a single national Police force this month.

In September of last year, I was invited to give my view on public sector reform at my party's national assembly. When I got there I bumped into someone I knew and he asked me,

'What are you doing here'?

"I am going to propose a Scottish National Police Force".

This is something I have blogged on over the years on many different internet sites including my own.

Needless to say our first stop was the public sector reform table as we were both 'cooking with gas' on the same issue.

Later Iain Gray two months down the line came out with the same thing, trailing pitifully behind me as usual.

The Scottish National Police paves the way for an unprecedented shake-up of law and order and at the same time ensures that front line services are protected.

We need as a new streamlined Police force but as well as that, an expansion of the numbers of Special Constables.

Although there is a pressing financial argument for change, my thoughts aren’t primarily just the cash aspect; operationally the benefits could be significant.

For far too long have different groups in law enforcement been fragmented and involved in protecting little fiefdoms.

The new national force will sweep that away and make it easier in the fight against crime both local and nationally levels.

As I said Labour already committed to a single force and with the current Scottish Government in favour, it means that the majority of MSPs are in favour of a complete merger.Chief constables will now discuss how a single force would work in practice and how various operational responsibilities will be divided up.

One thing which certain is that service reform will bring savings, considerable savings mooted in the region of £194 million pounds a year.

This amount has been calculated by a sub-working group of police officers, civil servants and consultants, set up by the Scottish Policing Board.

With this being a new radical idea there will be some resistance but the overall idea is workable, desirable and long overdue.

In an e-mail sent out to police board conveners, a civil servant involved in the restructuring process wrote that a ministerial statement will be issued by the Scottish Government on 12 January regarding the intent to move to a single force in the future.Not everyone is forward looking Norman MacLeod, convener of the Northern Joint Police Board, said:

"I am very, very disappointed to hear that the SNP could be making that pledge. Policing in northern Scotland would be very much reduced. Strathclyde and the surrounding areas would get preferential treatment."

The new national force will not operate in such a high handed manner and a high degree of local autonomy would still exist, which takes account of local priorities.
Martin Greig, convener of Grampian Joint Police Board, added:

"If I see figures that guarantee given savings and assurances of high performance and levels of resources adequately distributed, then I will be interested, but that has not happened. I am still very concerned that things are being pushed in this direction."

As to the functions of local police boards, they should be retained in some manner as well as additional oversight by national Police Board with members drawn from local boards and other external people.

There should also be a cross party Holyrood committee which interfaces with the national board.

This should address Iain Whyte, convener of Lothian and Borders Police Board concerns about his issues of the single force in relation to accountability to local communities and beyond.

The Lib Dems have missed the boat on this issue with their justice spokesman Robert Brown saying:

"It is not a democratic solution, to have just one chief constable and one justice minister in charge of policing."

That is why extra external scrutiny should be built into the system to allow the public to have confidence, local, national and Holyrood scrutiny would ensure this.

The new Scottish National Police Force will give us a 21st century force which will be better equipped to face the challenges in an ever changing world by being more flexible and dynamic.

It will work much more effectively in so many ways to serve the people of Scotland, it for this reason that this proposal should be keen addressed, it is the future.

George Laird
The Campaign for Human Rights at Glasgow University
Posted by G Laird at 4:23 PM

I've been involved with policing both in the UK and in Europe. This merger makes sense. You have to consider as well as the eight Territorial forces in Scotland there are other police and law enforcement forces under Westminster control who's manpower & roles could be merged into this new force. The British Transport Police are a prime example with their Scottish Division which could easily become a railways branch of the merged force. The SCDEA could also merge easily. The English Department of Energy's Civil Nuclear Constabulary have four bases in Scotland and there's the Home Office's UK Border Force who's Scottish officers could be transferred to Scottish Control. Finally, the MoD have four Police Forces operating in Scotland; The MoD Police, The Royal Military Police, The RAF Police & The Royal Navy Police. Certainly as the SNP plan for independence they will need a Scottish Police force to take on these roles & manpower. All said I think One force would be better than another seven Scottish versions of the English forces.