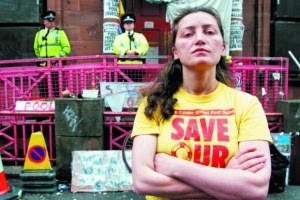 Tommy Sheridan will be sentenced on the 26th January in a little less than 3 weeks time.

And on the same day, he will probably be going to prison unless Lord Bracadale is minded to give him a suspended sentence.

If we think back to Jeffery Archer who committed perjury, he got 4 years in the clink.

It is said that Tommy Sheridan will appeal against his sentence; fair enough, ‘nothing ventured nothing gained’!

And given his situation there isn’t anything else worth doing with his time while locked up.

However when appealing he will need evidence, real evidence that although will be challenged has to stand up to scrutiny.

A supposed new witness for Sheridan is allegedly Community activist Fatima Uygun who says Sheridan could not have been at a sex club in Manchester on September 27, 2002 because she was with him that night at an event on socialism and the arts in Glasgow.

So, why wasn’t she called before?

She is quoted as saying:

And of course she will have a minute of the meeting with an attendance list?

Also does she remember the names of the other people at that meeting?

The sticking point in her claim is the public record which puts Ms Uygun’s birthday four days earlier, on September 23.

Then of course is the meeting in Glasgow in Sheridan’s diary?

And if it was why didn’t he call people from that meeting as witnesses as well as Fatima Uygun?

The problem is that files lodged at Companies House show that on six occasions between 2002 and 2009, she signed statements giving her date of birth as September 23, 1967, when she became the director or secretary of various limited companies.

And also Ms Uygun also gives her birthday as September 23 on her Facebook page.

That kind of puts a torpedo in her claims.

Ms Uygun should consider that because of the nature of the Sheridan case in being so high profile, the press will show great interest in even the most microscopic detail of the case.

She may also be seen as biased as she previously stood as a council candidate for Sheridan’s Solidarity party in Glasgow in 2007.

After the guilty verdict against Tommy Sheridan, she wrote:

“I have already made it my life’s mission to hunt the scab down like wild animals … adding their parasitic friends to my ‘hate list’.”

She is terribly funny, a part-time comic?

I wonder if she does impressions like Des McLean!

She also says that former Scottish Socialist MSP Carolyn Leckie is “scab scum” who “in an ideal world would be tarred and feathered.”

“I have been warned by the fat copper that his Lordship has warned that if I react again I will be thrown out for the rest of the trial.”

Fatima Uygun is said to one of three new witnesses reported to have been unearthed by the Sheridan camp.

My advice to Tommy Sheridan is to keep digging, get ‘real evidence’ and get a trial lawyer.

“The only people guilty here are socialist scabs from the SSP, [Rupert] Murdoch and the cops.”

Sounds too emotional to me!

George Laird
The Campaign for Human Rights at Glasgow University
Posted by G Laird at 2:18 PM

Tommy has not stopped digging a hole he has brought in a JCB. The Miracle of Fatima is hardly likely to help. Unless her 3's look remarkably like '7's? Besides which, witnesses in a criminal trial should not,unless they are experts, sit in - as Fatima did - during other witnesses evidence. Why on earth TS or Anwar thought they would gain by unearthing a vituperative and compromised witness is beyond me. However, on the 'Our Lady of Fatima' website there is a tract on 'Obedience'.

Beautiful George - never stop writing - i love your humour. See fatima, maybe she meant it was the week of her birthday and her husband was taking her out on the friday night because it was her birthday on the monday? Minutes and attendance list is all important of course.

Let's spin that thought out. So Fatima waits until Friday night to go out with hubbie. But still finds time to chair a meeting that evening? I think her own repeated references to her birthday being on the Friday will evaporate that excuse.

If this is the quality of the people lining up and willing to go straight down the line for Mr Sheridan, it casts an even blacker pall over the integrity of the rest of his "alibi" witnesses.

More importantly though, is this person of stable mind? (i mean this in the best of taste) From what she has said and how she offers her alibi, I suspect she may be emotionally rather vulnerable. In which case, it is rather disgraceful for Mr Sheridan's spin doctors and/or Scotsman journalists to raise this as a serious story.