Glasgow’s Sarah Palin, Gail Sheridan carries out an official visit to Barlinnie Prison to see if Scotland’s Nelson Mandela is being treated right 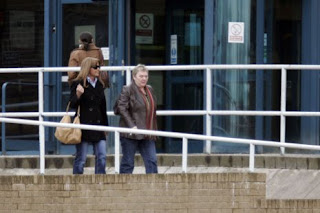 Glasgow’s Sarah Palin, Gail Sheridan has carried out an official visit to Barlinnie Prison to see if Scotland’s Nelson Mandela, her husband Tommy Sheridan is being treated right.

Talk of her sneaking into prison has flooded the public domain but she chose the front door as she proudly strolled up to met the only political prisoner in Barlinnie.

The reunion of the couple's was emotional as expected but she left her daughter behind.

Gabrielle is a bit young and would find the visit distressing.

However, fresh from announcing she will not stand for Holyrood, she is rumoured to be thinking of going on the ballot paper to win a city council seat for his Solidarity party.

I said I could see her standing for Glasgow City Council in a previous post on the 14th January.

It is said that she is thinking about a possible by-election if suspended Glasgow councillor Ruth Black is forced to stand down.

I haven’t heard that Ruth Black is minded to resign as a Councillor but who knows.

Black is being investigated in a cash-for-cronies probe.

"We are speaking to Gail in the hope of getting her to stand for election for Glasgow City Council.

"We're closely watching the situation as regards Ruth Black and if the circumstances prevail and there is a by-election, Gail would be the perfect candidate. She wants to put Gabrielle and the family first and foremost and that's why she felt standing for the Scottish parliament might be a bit too much right now”.

Interestingly Gail Sheridan stood down to allow Ruth Black to stand in the council elections when she was a Solidarity party member.

Then she defeated to the Labour Party being particularly chummy with disgraced Labour leader of shame Steven ‘bin laden’ Purcell.

The Craigton ward would probably offer Gail her best chance of gaining a foothold in politics but she would have to work very hard until Black’s suspension the Labour Party held three of the four seats in the ward.
However she does have a strong local connection by living there, which helps.

"It was an emotional meeting and they were relieved to see each other. He has been given a warm welcome when he arrived at Barlinnie, and everyone has been very supportive towards him. He was able to tell Gail all about the 34 postcards and letters that were delivered to him today."

Well, we will have to see!

George Laird
The Campaign for Human Rights at Glasgow University
Posted by G Laird at 5:55 PM

Ohhh wasnt Lynn Sheridan and Ruth Black the best of buddies when Black ran the Glasgow LGBT centre and Sheridan was co-chair of the committee??/
Its funny though how when these two were in control of the centre the place closed, at seperate times, sheridan being co chair when the centre closed in 2009, and Black had it closed down in 2010.....Now both are at loggerheads and Sheridan is trying to oust Black from her Craigton seat so the Gail Sheridan can stand for councillor.
Its total madness that anyone would want to have a Sheridan on the council as the place is corrupt and bad enough as it is without her winning a seat on the council
The Sheridan's are finished, no excuses, there done and dusted and bloody good riddance to them all.

Are you saying they can't count on your vote?

No pleasing some people!