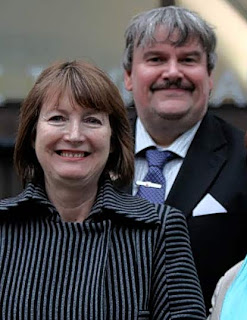 Have you noticed that quite a lot of Labour politicians seem to be getting in trouble?

Now, we have a Labour councillor with links to two members of the shadow cabinet who has been arrested.

On suspicion of grooming a child for sex!

He has been sacked with immediate effect from his role as a cabinet member for community safety at Southwark council.

And has also subsequently resigned as a Labour councillor!

The allegations centre on an incident involved an underage girl and "child grooming offences".

Friary, who is the Governor of a Camberwell Primary School knows both Harriet Harman and Tessa Jowell both south London MPs and members of the shadow cabinet.

He is alleged to have made contact with the child over the internet, holding several accounts on social networking sites including Facebook and Bebo.

They have since been taken down.

"This is absolutely shocking. No one in Southwark can believe it. Friary was a leading light in the local Labour Party; he is incredibly close to Harman and Jowell and was often seen out on the doorsteps helping them get elected."

The official website of Ms Harman, deputy leader of Labour and shadow secretary of state for international development had a link to Friary's blog.

This has since been removed.

"On 26 January a 51-year-old man was arrested by officers from the paedophile unit on suspicion of inciting a child to engage in sexual activity. He was taken to a west London police station and bailed to return in March pending further inquiries."

"As soon as I became aware of a police investigation, I immediately removed John Friary from his Cabinet position. The next day he resigned as councillor which was the right thing to do. The council is complying with all safeguarding procedures which need to be followed in situations such as these."

This is incredibly damaging for Harriet Harman and Tessa Jowell as well as the Labour Party generally.

Grooming underage little girls for sex, if found guilty he will be going to prison.

George Laird
The Campaign for Human Rights at Glasgow University
Posted by G Laird at 6:28 PM

Oh! I dont know a recent poll found a majority of sex offenders were drawn to Nationalist partys

"Oh! I dont know a recent poll found a majority of sex offenders were drawn to Nationalist partys".

Surprised that you dismissed this with such a casual remark.

This is a story in the public domain.

And it is serious, more so than expenses because it is someone's daughter.