Tommy Sheridan to defend himself at his sentencing hearing, lawyers warn him ‘Don't go it alone get help’, very sound legal eagle advice 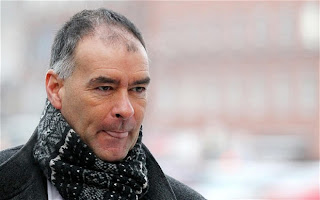 Dear All
In the next three weeks, Tommy Sheridan will be back at the High Court in front of Lord Bracadale for sentencing.
And prison is on the horizon.
And it could be a lengthy stretch inside lasting several years.
Through-out Tommy Sheridan's case I said he needed a trial lawyer from the word go, instead he decided to sack Maggie Scott QC and represent himself.
A colossal mistake on his part which I blogged back on in October 2010.
Found guilty, we move rapidly along towards sentencing.
If Sheridan decides to represent himself at the sentencing hearing he will do himself no favours.
And could increase his prison term, he could literally add years to his sentence.
By making his own plea in mitigation before trial judge Lord Bracadale on 26 January for a short sentence he will have to show remorse and acknowledge his guilt.
If he did that I am sure that Lord Bracadale who came across in the trial as a reasonable man would be minded to heir on the side of leniency.
Given there are no victims and Sheridan doesn't represent a threat to society, jail seems too harsh in my mind and possibly in the minds of others.
My advice to Sheridan is simple; if you're guilty make the mitigation plea and bite the bullet.
If you're innocent then tell Lord Bracadale as an innocent man you don't do mitigation.
Sheridan's choice!
Aamar Anwar, Sheridan's lawyer says Sheridan has no intention of employing a solicitor advocate to make the complicated legal argument.

Anwar should be talking Sheridan out of that idea.
Sheridan would do well to remember that he has a wife and daughter in this equation to consider, their welfare is important.
Lord Bracadale has called for a social inquiry report, which will include background information about Sheridan, to help to determine the length of his sentence.
And of course the judge will also take into account a plea in mitigation if made by Sheridan, or on his behalf, that will outline any personal reasons why his sentencing should be kept short.

Scottish legal professional and former BBC lawyer Alistair Bonnington said:
"The main advice I would give Tommy Sheridan is that he should have a lawyer there. A plea in mitigation requires a great deal of skill. The fact that it's done by a third party also makes a huge difference."
Defence solicitor advocate Robbie Burnett echoed this view by saying that a strong plea in mitigation can make a judge change their mind about the length of a sentence.
He said:

"It's difficult to know how much the judge will listen, but there may be facts and information that he should know about," he said."Much of that will be in the social inquiry report, but it is the duty of a solicitor to try their best to represent any issues that would mean that a jail sentence should be reduced."It is one of the areas where the skill of a professional would be a distinct advantage."

Mr Burnett added:
"My advice to any person is that you have to be honest - which is ironic in this situation - about your personal circumstances and the way the conviction is going to affect you, while at the same time accepting the seriousness of the offence and not seeming to make light of it."
He says what I said above, if you’re guilty then cough to it, show regret and remorse and give Lord Bracadale an opening to help, if you shut him out then there is little he can do for Sheridan other than slam him up hard.
At present Sheridan on his Facebook page says he intends to appeal, this to me doesn't look like someone who is going down the road of mitigation and lawyers have said the former MSP's comments on the social media website are "unwise".
Tommy Sheridan has a simple choice, he is guilty as decided by a jury of his peers then the best way forward is put this into the hands of someone else, let them tell a tale of woe and try to look like you know you have done wrong and are sorry.
If he is innocent, then he could stand his ground, say he is innocent and prepare himself for a length stay as a guest of her Majesty.
People do what they want to do but for once I would hope that Tommy Sheridan leaves his ego at the Court door and makes his decision based on the truth of the Court Case.
His next step is a gamble
Lord Bracadale can't help Sheridan unless he meets him halfway, for myself, I would still like to see a suspended sentence, fine and community service for Sheridan.
Maybe Lord Bracadale would be minded to go this route and it would be the first miracle of 2011 but sometimes miracles need a bit of help.
Either way Tommy Sheridan is getting punished on the 26th January 2011, his choice of how severe that will be.

If Sheridan needs any compelling reason to let someone else do it, then he needs look no further than his 5 hour speech which was a rant in front of the jury.
Quite simply Sheridan doesn’t have the skill to pitch to Lord Bracadale.
Yours sincerely
George Laird
The Campaign for Human Rights at Glasgow University
Posted by G Laird at 4:54 PM