Al Pieda makes ‘terror’ attack on Tory MP David Mundell, Pie is thrown hitting him in the back, luckily it was a dud, return of food weapons? 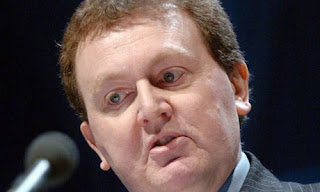 Terror is a fact of every day life which lurks in the shadows.

In Scotland a new terror group has formed.

Al Pieda is made up for martyrs whose mission is to deliver strategic and surgical strikes on politicians using pies.

The typical pie is lightweight and undetectable to airport security and is seen as harmless.

He was hit by a pie as he arrived at a private reception by an expert pieman waiting in the crowd.

David Mundell is the only Tory MP in Scotland!

One Tory is one too many.

Under the cover of a group of protestors, the state of the art pastry (shop bought) was carefully aimed and with precision timing it was launched.

Unlike in the ‘Day of the Jackal’, the marksman didn’t go for a headshot instead went for a traditional body shot like a trained Police marksman!

"He just took it calmly and said he wasn't going to press any charges."

A Tory spokesman after the ‘Pie of Destiny’ said that Mundell, MP for Dumfriesshire, Clydesdale and Tweeddale was at the reception in a party capacity and would not be taking further action.

Luckily for Mundell, the pie turned out to be a dud and not eggs or the Police would have to be scrambled to the scene.

In a major review of security MI5 have said that in future Frank McAveety style pie eaters would be brought in to deal with such incidents.

Labour MSP Frank McAveety has a reputation of throwing himself in front of pies!

Is the emergence of Al Pieda a return to food as a weapon of political dissent?

Tory MP David Mundell did the best thing; play down the incident so as not to ‘egg on’ the public.

As Mr. Miyagi would say:

‘egg on egg off’!
Yours sincerely

George Laird
The Campaign for Human Rights at Glasgow University
Posted by G Laird at 1:54 PM

Hola! I've been reading your blog for some time now and finally got the bravery to go ahead and give you a shout out from Huffman Texas! Just wanted to mention keep up the fantastic job!

My brother recommended I might like this web site. He used to be totally right.
This put up truly made my day. You cann't imagine just how so much time I had spent for this information! Thank you!