Ex-Labour MP Eric Illsley pleads guilty to expenses fraud at Southwark Crown Court, re-elected in May 2010 he faces losing his seat because of prison 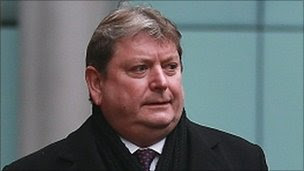 He is now the second Labour Party parliamentarian to admit wrong doing over the Westminster expenses scandal.

Illsley has pleaded guilty to three false accounting charges over claims for council tax, maintenance, repairs and utility bills for his second home.

And is now probably now looking at prison!

The news is another blow for the Labour Party and Red Ed Miliband although Illsley was suspended and sits as an independent, he was re-elected as Labour MP for Barnsley Central in May.

He is still a serving MP, if Illsley receives a prison term of 12 months or more he will be disqualified from being an MP under the Representation of the People Act 1981.

So, there may be another by-election in Barnsley Central in the offing, Chaytor got 18 months for three charges of fraud.

The standard Labour Party tactic was used by Illsley of denying everything but the fact he has plead guilty shows he is going for a reduced sentence.

"This was a significant sum of money and the grossly inflated claims he submitted could not be attributed to an oversight or accounting error - indeed he claimed that the expenses system was a way of supplementing members' salaries. By his guilty pleas he has accepted that he was dishonest in making these claims. As an elected representative, Eric Illsley took advantage of the trust placed in him by his constituents to act honourably on their behalf. Instead, he siphoned off public money into his own pockets and betrayed those who rightly expected the highest standards of integrity from him as a Member of Parliament."

Yet again the Labour Party has brought the House of Commons into disrepute; Eric Illsley will leave public office in disgrace, has destroyed his career and will spend some time in prison.

This is no way to act in public office, the public will put up with a lot but not such a serious breach of trust.
Eric Illsley had so much, so many opportunities and advantages but greed got the better of him.

Was it worth it?

When a person stands for public office, the public give them a clean sheet and it is up to that person so ensure it remains spotless.

George Laird
The Campaign for Human Rights at Glasgow University
Posted by G Laird at 1:04 PM