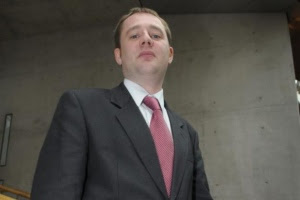 One of the things most notable about the Labour Party is the way they misrepresent the truth of a situation for political gain.

They do so because they consider the public to be so stupid and gullible, enough to fall for their lies.

In Scotland as in the rest of the UK there is a problem with people who re-offend and continually enter the prison system.

We know this as the ‘cycle of crime’ highlighted in the press and other MSM.

The job of Government is to put in place policies that will break the cycle of crime and show offenders that there is a tomorrow and a future.

In Scotland because it is a corrupt country, there is no future for certain sections of the community who are effectively shut out of employment and denied other social opportunities.

Prison as we know on both sides of the border doesn’t work.

Labour’s justice spokesman is MSP Richard Baker, he isn’t smart by any means but he is opportunist.

There are three immediate advantages to this:

1/ de-clutter the prison system.
2/ make offenders put something back into society.
3/ show offenders that there is another way of life.

Do you remember the Labour Party’s William Bain and his flawed ‘Carry a knife go to jail’?

What happened to that?

Nothing, it was a con to get elected and people of Springburn fell for it.

When the Crime Bill came before the Scottish Parliament after shouting the odds of ‘carry a knife, go to jail’, the Labour Party backed down.

Because they knew what they were proposing was illegal.

Labour says about 1,000 violent criminals will be given "get-out-of-jail-free cards" under new Scottish prison laws.

No, they won’t, they will be paying for their crimes that is the reality.

And despite Labour Party scaremongering by Labour MSP Richard Baker, it will be Judges who will still dispense three-month prison sentences if they believe the punishment fits the crime.

That is the way it should be rather than the Labour Party seeking to tamper with an independent judiciary.

A Scottish Government spokesman said the legislation is designed to make Scotland safer by reducing re-offending amongst low-level offenders, we can only do that by breaking the ‘cycle of crime’.

The Labour Party has no answers to this problem.

Some things like justice are too important to play party politics with, the old ‘Labour’ way hasn’t worked; it has failed, failed and failed again.

In itself the new law is a step in the right direction but it is just a step, much more is needed in terms of making society fairer and opening up opportunities which are currently being denied people.

When people have no future in society, they don’t conform to society’s rules and values.

Richard Baker is trying a similar tactic, using fear and scaremongering to get people to vote Labour.

Because the Labour Party in Scotland have no ideas on how to tackle crime!

Robert Owens once said that in order for people to be good they had to do good, community sentences allow offenders to do exactly that.

It’s all about planting a seed in people’s minds that allows ideas to flourish.

George Laird
The Campaign for Human Rights at Glasgow University
Posted by G Laird at 5:33 PM