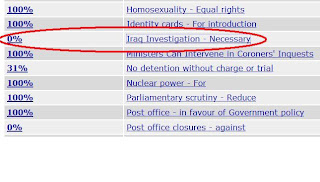 It seems that the blundering Ed Miliband’s grip on the Labour leadership is starting to slide.

Recently, he appoints poison viper Ed Balls as Shadow Chancellor, next he indulges in political opportunism by reaffirmed his opposition to the Iraq war.

Yesterday Labour leader Ed Miliband was in Scotland to try and boost the fortunes of Iain Gray.

In trying to promote the ‘East Coast Weasel’ events preceded him and he ended up fire fighting as the Alan Johnson Scandal and Andy Coulson scandal broke like a dam.

This saw the spectacle of the ‘Gray man’ being left out the picture standing about like a little boy waiting for his ‘daddy’ to finish talking to the ‘big folk’.

Gray was shunted to the side and left, looking completely lost.

After visiting the Mark Wright Project in Midlothian, Miliband said:

"On Iraq I have said it was a mistake, and that has always been my position”.

Although Ed Miliband was not an MP in 2003 when Blair was willing to pay the ‘blood price’ using other people’s blood, he has been keen to promote his anti-Iraq war credentials.

However there appears to be nothing on the public record to back up his claim.

So, far doing a little sniffing about I came up with the fact that ‘anti war’ Ed has a proud 0% voting record on the issue of ‘Iraq Investigation – Necessary’.

And it get worse, on 10 separate votes in the House of Commons in the period in which he has been an MP: in not a single one of these did Red Ed. Miliband take the opportunity to make clear, or even hint at, what he now so sincerely believes: that the Iraq war was wrong.

His mouth was firmly shut.

What did I saw about him being an opportunist?

On the equally disastrous fight in Afghanistan propping up a corrupt Government who rigged the last election and supports beating and rape of women in marriage, Miliband said:

"On the question of Afghanistan, I support what the Government is doing. I think they've got the approach right, to set a timetable for troops to come home by around 2015 because I do think it was a mission motivated, rightly, by what happened on September 11, 2001, and the dangers of terrorism being harboured in Afghanistan. There's another point there which is, whether you are in favour of the war or against it, our troops are going there in the interests of our country. For us, as politicians, it is incredibly important that troops get the best possible support that they can, not only while they are serving but when they come home. That's why the Mark Wright Project is such an important project and certainly left an important impression on me, that we should be doing more for war veterans. Hearing from the people round the table there, they felt they had mixed support and they felt that the Mark Wright Project made such a difference to them. Not just the physical support, but the psychological support."

If we weren’t propping up a corrupt government in Afghanistan there would be no need for the Mark Wright project because soldiers wouldn’t have been put in harm’s way in the first place.

On backing the ‘East Coast Weasel’ Miliband said that Labour has "a tough fight ahead."

Probably because Iain Gray is so objectionable to the people of Scotland, he is less popular than ex Labour Leader Michael Foot.

If you think of scrapping the bottom of the barrel, Iain Gray is tunnelling underneath.

Miliband however did signal that did not rule out a coalition with the Liberal Democrats, the party which Tory David Cameron now controls.

"We will fight the election, and then we'll have to decide what we're going to do after the election on the basis of the result. If, as I hope, Iain is in the position to become the First Minister, he will make the decisions that he thinks are appropriate to take Scotland forward”.

The bottom line is that if Labour is elected in May 2011, Scotland will suffer; Labour didn’t put a fight for Scots as the ‘feeble 50’ only too well demonstrated when Thatcher was in power and they won’t do it against the ‘heir to Blair.’

‘East Coast Weasel’ Iain Gray’s ‘coming out’ party was a damp squib yesterday because the ‘grown ups’ had to talk about important.

In the footage of the event, Iain Gray is seen darting away quickly out of camera when Miliband speaks.

‘East Coast Weasel’ Iain Gray is no leader of men.

George Laird
The Campaign for Human Rights at Glasgow University
Posted by G Laird at 9:52 AM