Tories and LibDems in 2015 election pact, Nick “the rat” Clegg does the final sell out of his party, he has buried the Lib Dems as a political force 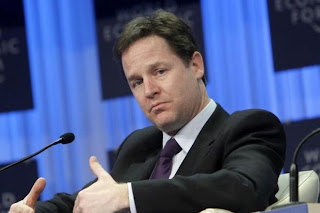 The sell out by Nick Clegg is complete.

A Tory-LibDem pact is being planned for the 2015 General Election.

For the Tories the advantages are clear, they want the Lib Dems to take the flak so that they can run in behind and secure a ‘victory’.

Holding on to political office!

This means that the task facing the Labour Party is huge.

The informal “soft-pedal strategy” was used in the Oldham by-election were David Cameron gave a nod and wink to his voters to switch sides.

The Tory vote collapsed in order to personally shore up Nick Clegg.

People who may benefit from the arrangement are LibDem ministers such as Energy Secretary Chris Huhne who cheated on his wife and his party colleague Jeremy Browne, whose majority in Somerset is also low.

Support for Nick Clegg’s party has slumped since the General Election in May.

And it is going to further drop when news of the Tory-LibDem pact is thought through; Clegg has effectively allowed the Lib Dems to be absorbed by the Tories in all but name.

For Lib Dems voters and activists this is the ultimate betrayal and begs the question, why work for them.

So, the battle is now on for other parties to woo the Lib Dem vote but they need a few carrots.

The proposed deal is an insurance policy should the Conservatives once again fail to achieve an outright majority.

And the Labour Party has knows that Clegg is vulnerable; he is the crack that they have to chip away at.

A Tory Cabinet minister referred to the recent by-election sums it up as it was paramount “for the Coalition to continue and not to be destabilised; in the case of Oldham that meant the LibDems doing well”.

Despite Labour winning, the side issue of tactically voting worked, it was the story of Oldham East.

“Who knows where we will be in 2015? But one scenario is an informal pact in which the two Coalition partners would help each other where they could. Voters aren’t stupid. They can work out who is best placed to win in their constituency – as they did in Oldham. It wouldn’t have to be a formal, top-down pact, which would be very difficult to impose on local associations in any case.”

Actually, given what is happening politically Ed Miliband has a strong chance to be PM with the largest party at a future election.

“Are we going to go hell for leather to defeat Chris Huhne in Eastleigh? No. I wouldn’t have any part in that. I am not going to go and campaign for a Tory victory there.”

So, the writing is on the wall, a new tactic to hold on to power.

And it is effective in some but not all cases.

George Laird
The Campaign for Human Rights at Glasgow University
Posted by G Laird at 2:16 PM

The Lib Dems under Clegg have nowhere to go but absorption by the Scum English Conservative party.