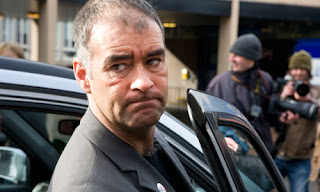 The Countdown is on.

He will walk in the front door and presumably out the back door into a prison van.

And it seems that Strathclyde Police, acting as the forces of law and order think that there maybe a demo at the High Court.

Scotland waits to see how Lord Bracadale will jump.

Will he be kind and impose a light sentence?

Or will he slam up Sheridan for years?

To the question, does Sheridan pose a danger to the public?

A key question in whether to slam someone up in the clink!

I would say no.

Hopefully, Lord Bracadale will save the taxpayer a few quid and impose a suspended sentence.

If Sheridan is slammed up for 4 years, it would cost the taxpayer circa £130K.

George Laird
The Campaign for Human Rights at Glasgow University
Posted by G Laird at 10:46 AM

You dont know him. He is a danger to the public.

Best lock him up then.

Best thing would be to lock him up, send you a clear message that perjury is a serious offence, more so when it involves MSP's, or ex, MSP's.
He deserves a custodial sentence as he has been a thorn in the side of many so i hope the judge sends him down.

ALL politicians, councillors, esp in Glasgow City Council will be watching with bated breath to see the outcome of this fiasco and see how long Tango Tommy gets as a few of them will be quaking in their boots in the chamber of corruption