Expenses peer Lord Taylor 'hijacked nephew's address', Southwark Crown Court will be issuing him with a new one soon, HMP Prison, free bed and board 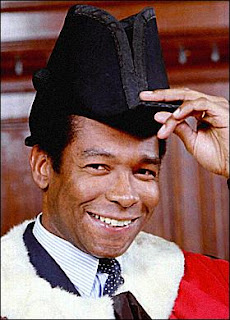 In a Court, you can effectively watch mini plays and dramas unfold before your very eyes.

Southwark Crown Court, London has a good series of mini plays involving people from the Palace of Westminster running at the moment involving politicians.

Also another ex Labour MP Eric Illsley has also pleaded guilty to expenses fraud, what sentence he will get we will find out in due course.

But we can expect he will be going to jail.

However, the expenses scandal which has rocked Westminster isn’t just a Labour Party problem, it affects others.

Like former Conservative peer Lord Taylor of Warwick who once outed resigned the Tory whip.

To that end, his case isn’t helped by his nephew who told a court he was "shocked" and "quite angry" when he heard the politician had used his address as his main place of residence on his claim forms.

"I was shocked. I was quite angry, actually, because I had always wondered why he had been quite so friendly, because we didn't on the face of it have a lot in common."He added:

"At the point where we were being doorstepped by the media, I suddenly realised that maybe his wasn't actually a real friendship at all."The court has heard that the peer submitted forms saying his main residence was in Oxford, when Lord Taylor actually lived in Ealing, west London.He claimed for travelling expenses between the cities and for overnight subsistence to cover being in London.
Lord Taylor faces six counts of false accounting, relating to claims he made under the House of Lords members' reimbursement allowance scheme, on various dates between March 2006 and October 2007.

And given the way the wind is blowing, he is looking at a prison sentence.The prosecution says the peer has agreed that he never stayed at the address in Oxford and had no legal or financial interest in it.So, what is his defence?

Well, from what I can gather it appears to be ‘I’m guilty but I’m innocent’!

Mohammed Khamisa, QC, defending, has said others told Lord Taylor that his claims were acceptable because members did not receive a salary.

Unfortunately ignorance of the law isn’t a defence.

"You will hear that others with whom he worked, other peers he spoke to, had all told him that what he was doing was acceptable."

I wonder if anyone burst out laughing!
The ‘he told me it was okay’ defence isn’t new by any means and doesn’t have a successful track record with juries.

Surely, a better route is to plead guilty and stop wasting the Court’s time!

Lord Taylor, 58, of Lynwood Road, Ealing, lied on the forms to get the expenses.

It is clearly cut and dried.

George Laird
The Campaign for Human Rights at Glasgow University
Posted by G Laird at 3:27 PM