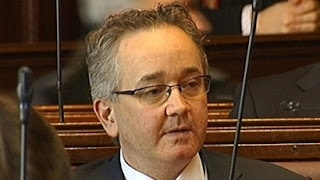 The Labour myth is that they are fighting for and on behalf of the working man.

A sick joke used to delude the gullible.

Glasgow Labour Council of shame is steeped in entitlement and cronyism, the City is run by Labour for Labour.

This is so that the Glasgow Labour Group under Gordon ‘free dinners’ Matheson can force through further savings.

At the expense of the workers!

At present Glasgow City Council is saying that it will stick to its position of no compulsory redundancies.

But they have already reneged on that promise.

Just before Xmas, they sacked a disabled man who was entitled to full worker’s protection; the case is being taken further by his union reps.

Why do people vote Labour?

They vote that way because of tradition and in their eyes the lack of a viable alternative.

They sold out long ago to big business and greed.

Steven ‘bin laden’ Purcell may have created the ALEO’s but the road to privatisation and feathering Labour’s nest started long before that.

With the latest plan for reduced holiday entitlement and increased hours, this has lead to the unions raised the flag, not of surrender but of war!

The spectre of waves of industrial action throughout the spring and summer is on the cards and could focus people’s minds to where they cast their vote for Holyrood.

Who is willing to stand up for Glasgow and its workers?

Around 18,000 workers could be affected by Matheson’s folly.

And could Labour donors who get Labour Council contracts be affected?

I would probably say no, they will be ‘ring fenced’; Labour won’t be cutting back on potential donor’s cash pouring into them.

Glasgow is looking at nearly £60 million in cuts in the next financial year.

So, the question is why aren’t Council Services structured better to make and develop profits like a private company?

They manage on their Council ‘giro’ and don’t think because there is nothing in it for them.

We need commercial sector know how coupled with public sector ethics, so if a profit or money can be generated it is ring fenced to stay in that department.

The council has also has hinted that down the line the prospect of further job losses is on the table. 4000 people are already leaving in the next three years.

And Glasgow has entered into the sharing services with seven other councils.

“Our staffing bill represents a substantial percentage of our total expenditure and the scale of the challenge we face is such that it is one place where we will need to find savings. The administration is determined to avoid compulsory redundancies or a reduction in core pay, so we’ll need to look at other options.”

And that is Glasgow’s problem, lack of development of services and departments in terms of making them more commercially minded, the development of profit by generating business is missing in depth.

The GMB’s Martin Doran said any move against conditions would be political suicide, adding that the union would ‘mobilise against Labour’ in the local government elections in 2012.

They only way to do that is to back another party that has a realistic chance of controlling the Council.

“There’s a lot of discontent on the horizon. We always knew that terms and conditions would be an issue but eroding them at a time when there’s going to be extra burdens on staff will not be tolerated.”

It seems that Gordon ‘free dinners’ Matheson after taking the Steven ‘bin laden’ Purcell Presidency is following on the tradition of destroying Glasgow.

People in Glasgow need to wake up and smell the coffee, put on their booties and go down the Polling station and vote these clowns out.

George Laird
The Campaign for Human Rights at Glasgow University
Posted by G Laird at 4:49 PM