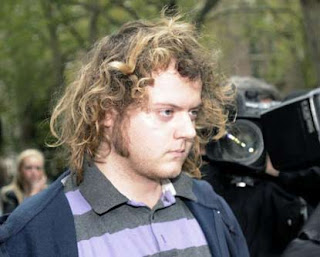 Edward Woollard wanted to change the world so he set out to protest about tuition fees at a mass demo.

He will be remembered as the guy who threw a fire extinguisher from the roof of a central London building and could have killed innocent people below.

Edward Woollard is 18, so he should have known his actions were highly irresponsible.

He has rightly been jailed for two years and eight months for committing violent disorder.

It is a harsh sentence but a necessary sentence because a message has to be sent that this type of action will not be tolerated.

Freedom of speech and the right to protest are hard fought and won liberties that must be protected in society, we can't tolerate curtailment of our human rights.

“It is my judgment, exceedingly fortunate that your action did not result in death or very serious injury either to a police officer or a fellow protester.”

"It is deeply regrettable, indeed a shocking thing, for a court to have sentence a young man such as you to a substantial term of custody. But the courts have a duty to provide the community with such protection from violence as they can. This means sending out a very clear message to anyone minded to behave in this way that an offence of this seriousness will not be tolerated."

"It is my judgment, exceedingly fortunate that your action did not result in death or very serious injury either to a police officer or a fellow protester."

By pleading guilty Woollard will get a reduced sentence.

A moment of madness on Woollard’s part has done incredible damage to him and his family.

In a statement, Brockenhurst College said:

"The college views what occurred as extremely serious and Edward Woollard has been on permanent exclusion since the incident."

Wollard will serve at least half of his sentence for violent disorder in a young offenders’ institution.

After he comes out then perhaps he will be wiser and mindful of the safety of others.

It was the right decision by the Judge.
Yours sincerely

It doesn't matter which way you look at it, what he did could have killed someone. As you say, he was eighteen years old at the time and that's more than old enough to know right from wrong.

I agree that he's been made an example of but I'm actually ok with that. What other way is there of showing that that kind of behaviour just isn't acceptable? The right to peaceful protest is a very precious thing.

I understand that he was angry. Of course he's angry. I'd be angry if they tripled my student fees and then the door hit me on the backside and then I was facing a cold, hard graduate jobs market. But violence didn't solve anything.