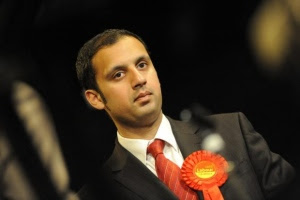 Baroness Warsi is minister without portfolio and Conservative Party chairman.

She recently gave a speech regarding Islamophiobia which she painted ordinary white people as racists.

Warzi said that ordinary family conversation at the “dinner table” includes racism against Muslims as an acceptable topic!

Prime Minister David Cameron has distance himself from her remarks.

This is an example of someone who is a race candidate.

After her gaff, Labour MP Anas Sarwar jumped on the bandwagon by saying:

“There is no doubt that there has been a rise in Islamophiobia in this country since 9/11, the war in Iraq and the 7/7 bombings. We have got to make sure that we are not complacent about this, just as we should not be complacent about any other kind of racism.”

I remember Anas Sarwar from my time at the human rights abusing Glasgow University, as a coach teaching for free, he took great delight in telling me how rich is father was.

He was doing a dentistry course.

And I was living in poverty!

He was shit at boxing, too much carry on in his head and immature.

Anas Sarwar represents Glasgow Central and is the son of Mohammad Sarwar, the first Muslim to be elected to the House of Commons in 1997.

He says that the peer’s comments were to be welcomed.

Here is an example of how thick Anas is.

Sarwar agrees with her it was dangerous to divide Muslims into moderates and extremists.

“It is wrong to divide any community into two groups or any other number of groups.”

Then bizarrely he says there was still a place for the word “extremist”.

So, is he saying all Muslims are “extremists”?

Those Muslims who aren’t extremist, what are they, if they aren’t moderate?

Are they extremist lite?

What does it say that he agrees Warzi that mainstream society thinks racism is normal?

I think it says that he is as politically naïve as her.

Recently a study came into the public domain which said that 32 per cent of Muslim respondents believed killing in the name of religion is justified.

Also revealed is that 40 per cent want Muslims in the UK to be under Sharia law.

54% want a Muslim party in Parliament.

You can read my post by clicking on the link:

Anas Sarwar was stupid to climb on the race bandwagon, he should be trying to be an MP for all the community rather than a section of it.

George Laird
The Campaign for Human Rights at Glasgow University
Posted by G Laird at 2:58 PM

I'm really impressed with your writing skills and also with the layout on your blog. Is this a paid theme or did you customize it yourself? Anyway keep up the excellent quality writing, it is rare to see a great blog like this one these days.

Hello, yeah this piece of writing is in fact
nice and I have learned lot of things from it about blogging.

Excellent web site you have here.. It's difficult
to find good quality writing like yours nowadays. I honestly
appreciate individuals like you! Take care!!