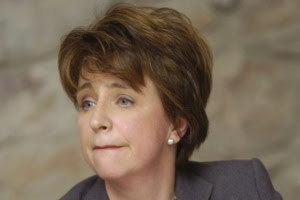 She is in the shit now and she doesn’t have the boots for it.

Wendy ‘horrible’ Alexander has been reported for her despicable behaviour!

And it is not for the first time that the Glasgow University product has been outed over her manners.

Alan Cochrane of the Telegraph describes a scene in the Holyrood Canteen of unwelcome Alexander attention.

What makes her such an arsehole?

If she has a brain the size of a planet as touted by Labour, surely she is able to get the jist of ‘f*ck off’?

Cochrane’s horror story in his own words:

“Those of us in the cheap seats have taken to adopting any kind of ruse, subterfuge or, better still, detour to avoid walking anywhere near her in the parliamentary precinct, for fear of being accosted and "Wendied". She simply cannot stop talking about it”.

What about being blunt?

“All of which brings me back to lunch in the parliamentary canteen. Surely that was a safe area, thought several of us yesterday. However, I hadn’t even finished my sausage roll and beans – OK, I had the chips, too – when over she came, pulled up a chair and planked herself down at our table. Being well brought-up chaps, we didn’t say a word; not, that is, until she started her dissertation. At that I picked up my tray and, in the words of Fleet Street veterans everywhere when confronted by a lady’s unwanted attentions, made my excuses and left. At least I was honest; the man from the BBC pretended to take a phone call”.

Sat her doughy arse down uninvited and disturbed eating, isn't she aware of the covenant?

And how can she not understand that people have twigged that it isn’t sunshine coming out her rear end?

The latest incident at Holyrood is worse.

It seems that two academics don’t take kindly to being ‘wendied’ or as we normal folk say bullied!

After complaining to Presiding Officer Alex Fergusson and being told by him that:

“I should begin by clarifying that the conduct of committee meetings is the responsibility of conveners alone, I have therefore forwarded your letter to the convener of the Scotland Bill Committee so that your specific concerns can be considered in the appropriate forum”.

The two academics at the centre of the row over their treatment by the Scotland Bill Committee have now made a formal complaint to the Scottish Parliamentary Standards Commissioner.

Professor Andrew Hughes Hallett, of St Andrews University and George Mason University in the United States, and Professor Drew Scott of the Europa Institute at Edinburgh University has written a detailed complaint to the commissioner, Stuart Allan.

Hopefully, they will get a detailed and positive response; Alexander has damaged the standing of two academics and the Holyrood Parliament.

You pop in to give evidence for free and some clown with a history degree who failed the Glasgow University Medical Course via abandonment has the cheek to question your professional standing.

Best not to let that type of thing pass.

And it gets worse for the Glasgow University product.

Professor A Lee Fritschler, who served in the sub-Cabinets of Presidents Clinton and Carter has written to Presiding Officer Alex Fergusson. He writes of his “dismay” at the way the two witnesses were “harassed in mean, petty and non-germane ways”.

Of course Alexander has an excuse for her behaviour; she is a product of human rights abusing Glasgow University who treat people like shit.

The pressure is now on for Wendy ‘horrible’ Alexander to make a full public apology for her behaviour.

“This is not about bruised egos, but our deep and genuine concern that if what happened last Tuesday goes unchallenged it could have a serious and lasting impact on the Scottish Parliament committees system and, in a wider sense, on the democratic process itself.”

“That we were treated with extraordinary impoliteness and discourtesy by some members of that Committee, in particular the Convener, Ms Wendy Alexander, MSP, and Mr David McLetchie, MSP, a member of the Committee. We consider that their questioning was both aggressive and motivated by considerations other than asking us to explain our responses to the questions we had been invited to address. That the Scotland Bill Committee has abused its work of scrutinising the provisions of the Scotland Bill by contriving a pre-arranged and orchestrated effort to discredit our work on fiscal autonomy, and to tarnish publicly our professional reputations, at considerable cost, for expressly party political motives.”

“It is very clearly up to the Committee members, from their own perspectives, to pursue lines of questioning as they see fit within the Parliament’s rules.”

If Professor Andrew Hughes Hallett, of St Andrews University and George Mason University in the United States, and Professor Drew Scott of the Europa Institute at Edinburgh University don’t stand up to this type of mean, petty and non-germane ways then Wendy Alexander will continue to do it to others.

It is time to rally the academic community and organise a boycott, that will send alarm bells ringing in the ‘pocket money’ parliament. Is it worth the damage to the professional reputations of academics to be interogated by abusive idiots?

Yep its a real shame the elected MSPs for the Scottish Parliament representing all the people of Scotland.

Had the temerity to ask the snp supporting experts? for the evidence to support their claims.
and in typical snp style being unable to substantiate their wild assertions.
Have decided(why am i not surprised) to use the old snp ploy we wuz ambushed by the nasty unionists.

I did suggest that Alan follow this and then ask Wendy about it. Poor Niko can't see his own hypocrisy.
http://newsnetscotland.com/politics/928-labour-and-the-smear-gone-wrong

sorry for posting on this thread, but, great call on the Jo Yeates murder. You said the clue to solving the case was the flat and surrounding area.

This is the best political and social blog in Glasgow, you have a habit of getting it right and publishing before hand.