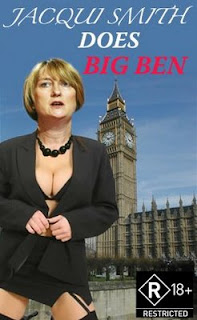 Some people will do anything for money.

Donations to the campaign for her to keep her clothes on should be sent to the BBC Trust.

Her husband charged the taxpayer for the cost of hiring two blue movies which he watched.

Surely a better title would be ‘put your clothes back on I’m having my tea’!

During her voyage into ‘Tits oot for the Lads’, she will ‘investigate’ the pornography industry in the UK.

This means that Oxford educated Smith will be talking to people about the ‘classics’.

We will hear in the programme her talk about her own attitudes to the industry.

As if anyone would care!

"In making this programme, I've been able to challenge my own views and attitudes and I want others to have the chance to join the debate too."

Because Smith wants to be a TV presenter since she was bounced out of Parliament by the people.

They had an interest in her doughy arse bouncing along the pavement as she was kicked out.

The middle class BBC said the programme would see Smith question her own opinions and experience along the way trying to inject some vitality into what will be a flaccid and limb documentary.

Will the BBC hire ‘fluffers’ to try and get this organ erect?

I think this documentary will be a sadomasochism experience for the viewers.

If you are doing to do a sex documentary then get someone decent like Donna Ewin to front it.

Finally, do you know why sheep shagging died out?

It was because women objected to guys taking sheep to the pictures!

George Laird
The Campaign for Human Rights at Glasgow University
Posted by G Laird at 2:21 PM