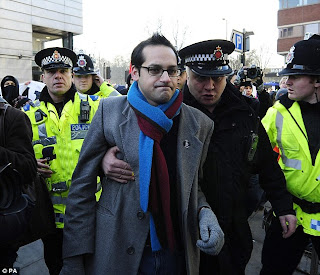 Tories are becoming universally unpopular as their coalition partners the Lib Dems.

And it seems that even unelected wannabe politicians of Labour Party aren’t safe either.

Aaron Porter is the national president of the NUS, a vehicle for wannabe Labour MPs to use to avoid doing activism on the street through-out the year.

Today he has to be escorted to safety by police after he was surrounded by protesters calling for his resignation.

As I said he is in the Labour Party, another Tory style organisation for the middle class to get elected in ghetto areas through out Britain.

Luckily for Mr. Porter the Police were able to escort him before the crowd had the opportunity to do him any harm.

Porter is facing calls to step down as NUS president by members of the National Campaign Against Fees and Cuts. They say he has ‘lost the confidence of the movement’.

The protest march attended by thousands began peacefully and was escorted by mounted police.

Then it all went wrong as around 150 demonstrators broke off the agreed route and headed towards the city centre, where they targeted Mr Porter.

With more and more protests in the offing, the risk of rioting and targeting of the political class is growing.

George Laird
The Campaign for Human Rights at Glasgow University
Posted by G Laird at 3:29 PM

The Daily Mail has actually written:

This, to my knowledge uncorroborated and anonymous allegation, has been repeated by Sky:

"Demonstrators had surrounded him, chanting anti-Semitic insults and calling for him to resign as he attended the rally."

If i was being cynical of the Daily Mail's perhaps deliberately vague statement : it's ambiguous as to when and where the "photographer" heard such alleged chants, or if they heard these chants at all rather than having "reported" them.

The only said-to-be 'eye witness' reports I've just come across are by an anonymous commentator at:

"I was at this protest today and I heard 2, yes, two people chanting this. And, guess what, the two men chanting this were of Asian descent, they were not white. Also what the article fails to mention is that about 20 or so people started chanting “no, no, no to racists” at these men.
But I see this place is more interested in believing the Daily Mail version of the story (who have never, ever lied about anything or smeared any people)."

And Porter's alluding statement, reported in the FT:

"Mr Porter told NUS members in an e-mail: 'Just before the march started, I was surrounded by a particularly vicious minority of protesters more intent on shouting threatening and racist abuse at me rather than focusing on the issues. Instead of standing together and fighting the cuts, they instead chose to pursue me along Manchester’s Oxford Road and drive me away from the start of the march. As a result, under the strong advice of the police, I had to withdraw myself from the rally'."

As for the headline "left-wing protesters in racist attack", where is the evidence of this rather broadly defined political bent, other than indulging Sky's collapsing of events?

For a blog purportedly campaigning for human rights, with the extent of police infiltration and provocation within protests exposed in recent months, isn't it irresponsible to repeat unreferenced hard-right 'news' media claims in this way?

However the extreme left want to spin this it is clear that there is a minority element amongst them who articulate offensive racist slurs.

Until they deal with this then their 'anti racist' campaigns' are just hypocricy.