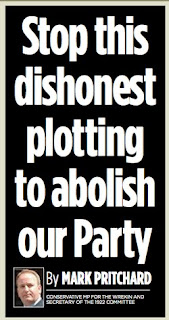 It seems that all is not well or happy in the Tory ranks after David Cameron has adopted the so-called “soft pedal strategy” for the 2015 Westminster election.

The idea is that no hope Tories vote Lib Dem if they have a better chance to win a seat and vice versa.

And this has gone down like a lead balloon with Tory rank and file so much so that the secretary of the Tory backbench 1922 Committee has reacted with fury to revelations of an informal pact with the Liberal Democrats at the next General Election.

“It should be remembered that the future of our country and party is more important than any one person who happens to reside in No 10.”

Bad news for Cameron and equally bad for Nick Clegg who has used up a lot of good will in his party after selling out Lib Dem principles in favour of a ministerial salary.

Pritchard is on a roll as he spoke out against the “purple plotters” high up within the Tories and LibDems.

These are ones who are happy about the two parties being so cosy up together.

Things have got so bad that he claims he was asked to “stop rocking the boat”, a warning to remain silent.

“I was told that this nonsense about joining with the LibDems would stop, but it hasn’t. I am not prepared to have unnamed cabinet ministers putting about stories of pacts and mergers while party traditionalists like me are gagged. The vast majority of Conservative members believe in retaining the traditions of the Tory Party. This debate must be held in the open.”

“Who knows where we will be in 2015? But one scenario is an informal pact in which the two Coalition partners would help each other where they could. Voters aren’t stupid. They can work out who is best placed to win in their constituency, as they did in Oldham. It wouldn’t have to be a formal, top-down pact, which would be very difficult to impose on local associations in any case.”

The reason for a “soft pact” is to save Lib Dem and Tory Ministers who are under threat of losing their seats; such a tactic makes it meaningless that Tories and Lib Dem are separate parties.

Effectively the leader of the Liberal Democrat Party is David Cameron, he will do anything to try and shut down Labour from gaining the largest majority in 2015.

It seems that Mark Pritchard has a tough fight ahead as the leadership put political advantage before party and core beliefs.

The sell out continues.

George Laird
The Campaign for Human Rights at Glasgow University
Posted by G Laird at 4:26 PM