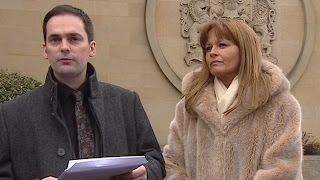 Gail Sheridan is standing for election.

Recently she was in Court with her husband Tommy Sheridan facing charges in their perjury case.

Prior to her Court appearance she had been arrested and interviewed by the Police.

Tapes of those interviews have been put in the public domain by the BBC.

During an interview she was accused of acting like an "IRA terrorist" during police questioning.

Det Sgt Stuart Harkness told the High Court in Glasgow her persistent silence and focus on a set of rosary beads was a technique used by terrorists.

This has led to Gail Sheridan lodging a complaint about alleged anti-Catholic treatment by police.

And with her standing in Glasgow playing the sectarian card could help focus the minds of the Catholic voters.

Particularly Labour Party voters who know that their regional list vote is meaningless because they generally win every first past the post seat in Glasgow.

And Glasgow has a strong Catholic community.

Aamer Anwar, Sheridan’s Lawyer has written to Lothian and Borders Police about officers taking away Mrs Sheridan's rosary beads during a police interview.

As an act it was designed to make her feel intimidated because she refused to give up her right to silence as her Lawyer suggested.

As well as the complaint to the Police, Aamer Anwar has also written to the Lord Advocate over claims his client was mistreated by police.

Elish ‘Labour’ Angiolini is stepping down and as such will kick this political football into the long grass.

It is rumoured that Team Angiolini is in line to be a judge.

"The formal complaint regarding Gail's treatment by police may well lead to a civil action. She was left traumatised and is upset."

But not too traumatised and is upset to use it for political purposes, stick in leaflets and put it through people’s doors.

Playing the sectarian card can like the race card be a double edge sword.

Glasgow’s Sarah Palin will have to tread very carefully.

Yours sincerely
George Laird
The Campaign for Human Rights at Glasgow University
Posted by G Laird at 2:30 PM

Glasgow’s Sarah Palin will have to tread very carefully.