Unpopular SNP leader Nicola Sturgeon says “Westminster will be 'shaking in its boots”, Alex Salmond wants to return to Westminster, is there anyone seriously scared of a man who is married to a woman old enough to be his mother, wrong again Nicola! 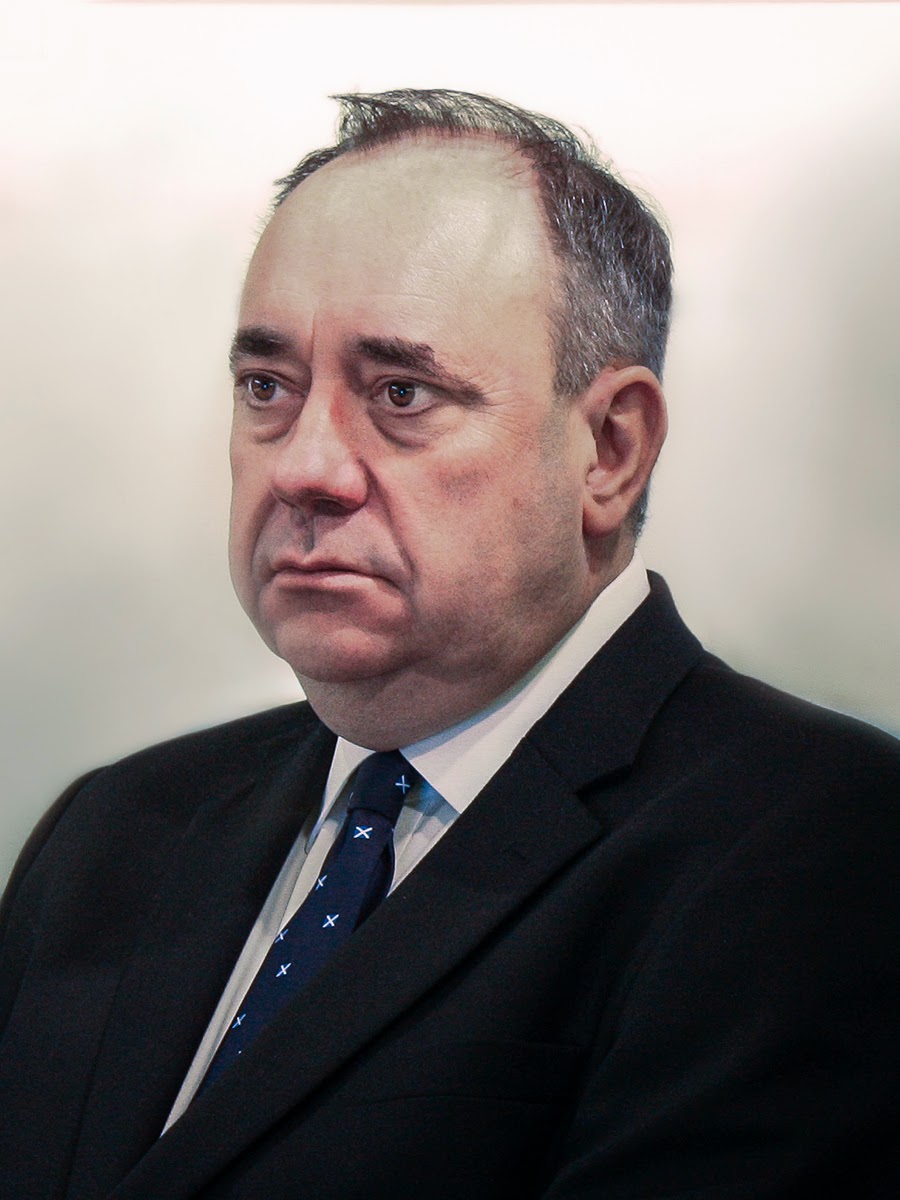 “Westminster will be 'shaking in its boots”.

It is because Scotland’s ‘jolly fat man’ Alex Salmond has decided to attempt to return to Westminster.

Why Sturgeon thinks a man who is married to a woman old enough to be his mother could frighten anyone is beyond me.

Such people are laughed at.

If Alex Salmond does return to Westminster, he returns a loser, the man who lost the attempt to win Scottish independence, in reality his bid was never credible because it was based on lies, lies and lies.

Salmond and Sturgeon would have plunged Scotland into chaos because of their illiterate economic policies particularly since it was based on oil, and that price has fallen through the floor.

The idea he would head a “strong group” of SNP MPs is equally bizarre, if you think back to 2010 and his ‘elect a local champion’ campaign, it was stuffed full of his and Sturgeon’s cronies, people who were not local and importantly not champions either.

The SNP entered that election with previously having 7 MPs, the day after the vote, they had 6 MPs.

No one believed the nonsense of electing a local champion, because it didn’t exist.

As to Salmond saying he will hold the balance of power in the next UK government, again this is delusion, there is no deals to make by the unionists, even if the SNP did get an increase in numbers.

Clearly the strategy is to plan a campaign of grievance regarding the Smith Commission report that somehow Scotland has been robbed and cheated.

We weren’t, we were asked, did we want independence and the majority said no, that being said, many unhelpful interventions were made by people on the unionist side.

The people of Scotland won the Scottish independence referendum not the unionist politicians who efforts were in some cases particularly poor, it is an open secret that Better Together in Glasgow was exceptional poorly run, these people are now helping run the Labour MP Jim Murphy campaign.

With Alex Salmond standing it was thought he would face off against Liberal Democrat Treasury Secretary Danny Alexander in Inverness, Nairn, Badenoch and Strathspey. It now seems that he plans to stand in Gordon were Sir Malcolm Bruce is retiring. Lib Dem candidate is Christine Jardine who isn’t exactly a superstar politically, she said the area had been “short-changed” during Mr Salmond’s time as first minister.

Jardine will have to hope that people will back the Lib Dem brand.

“People in Gordon rejected the first minister’s independence plans overwhelmingly at the referendum. I am sure that they would be delighted to have the chance to reject him again in May. Bring it on.”

The Lib Dems will have to work their socks off as the SNP will flood the area to try and get Alex Salmond elected to keep him out of Holyrood so Sturgeon doesn’t look like his puppet.

“The North-east of Scotland has led the way in Scottish politics before, and I believe we can do it again next May.”

The North East massively rejected independence in Salmond’s own backyard, he should remember that, also the anti English hate campaign run in places likes Glasgow will not work in the North East.

Interestingly, Salmond said that would not seek to replace deadbeat SNP MP Angus Robertson as SNP group leader at Westminster.

If anyone should be removed from that position it should be Angus Robertson, he leads nothing and does it exceptionally poorly.

Obviously the SNP want a Labour Government to try and get more power, but it may transpire that although wanting a deal, Salmond will get nothing; people could be facing the prospect that there may be a hung parliament and it could be Ukip that is calling the shots.
If that is the case, the Nationalists will have nowhere to go politically.

Lib Dem candidate Christine Jardine exactly isn’t the best choice for the Liberal Democrats, they will have to hope their brand is the key factor with voters, that and many people dislike of Alex Salmond personally.

Senior SNP Cllrs engage in 'book burning' in Paisley, "where they burn books, they will ultimately burn people as well", fascism is back in Scotland as the SNP mask slips 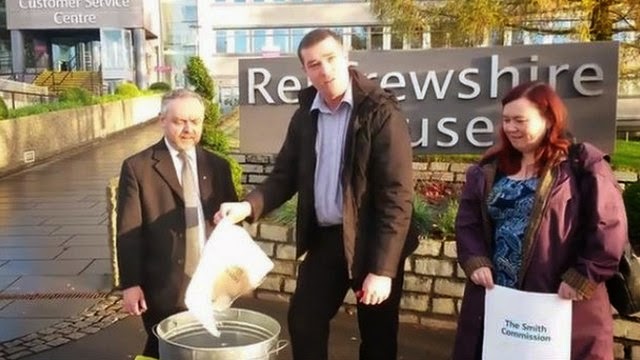 There is a consider lack of talent in the Scottish National Party, I have said this for years on end.

In a word, you could aptly describe some of their elected representatives and prospective candidates as dross!

And that would be the kind version.

Four deadbeat nationalist councillors decided as a stunt to film themselves burning a copy of the Smith Commission report.

During the 1930’s, it was popular with the Nazis in Germany to burn anti German literature so that other voices and opinions were silenced.

Fast forward to 2014, we have people connected to the senior leadership of the SNP doing likewise.

I previously blogged that the SNP have voted for the return of fascism, in a party led by the stupid, you can’t expect much better.

To show how incredibly stupid beyond belief they are, the four nationalist councillors thought it was a good idea to upload the video to YouTube.

Sadly for them, others have copied it so, the SNP ‘book burning’ scene is still kicking around on the internet, how lucky for them…. Not!

After the ‘stars’ put up their work, it was swiftly deleted, allegedly prompted some kind of anger and embarrassment among the SNP leadership.

Anyway, unpopular Nicola Sturgeon is now First Minister of Scotland, she is at present trying to re-invent herself as a “caring individual”, which is a bit of a stretch when you remember she left Scots women to die from cancer because they could get the right cancer drugs.

The three councillors who were caught on film are Brian Lawson, Will Mylet and Mags MacLaren.

Nobodies in reality; typical cannon fodder in the party, the director of photography was SNP Cllr Kenny MacLaren who was behind the camera. Holywood won’t be calling probably on the basis; the idiot didn’t use a tripod to steady the shot.

All the cretins who took part have since been suspended pending a disciplinary hearing which I suspect will be a farce, Ms MacLaren runs transport minister Derek Mackay's constituency office.

Derek MacKay is a rat but also part of the SNP clique that unpopular Nicola Sturgeon relies on, MacLaren’s husband also involved is a researcher for SNP MSP Stuart McMillan.

I haven’t blogged on the Smith Commission recommendations, published last week because it was always going to be a pre determined offer, a form of dog and pony show to give the appearance of democracy.

Westminster had an offer.

Although, it has been largely been hailed by the pro-union parties as delivering on the pre-referendum 'vow', the SNP see it differently, in fact the Smith Commission was rushed, pushed through to clear the way for the Westminster 2015 election, not more, I would have given it more time.

“Many people are disappointed with the result of the referendum and the level of devolution recommended by the Smith Commission, however Scotland will only make progress if we debate our views openly and with respect”.

The “many” she refers to is a minority, and as to the crap of “debate our views openly and with respect”, she is a two faced rat, she just covers it up better than most and the press goes along with it.

On the burning incident:

“It is essential that in that debate, conduct does not fall short of the high standard that is rightly expected by the public. My clear view is that setting fire to something because you don’t agree with it is not acceptable behaviour.”

That is code for the SNP wanting to be seen as victims for the 2015 election with Sturgeon playing the woman who has been wronged. If that is her tactic, she should wake up to the fact that the majority of Scots can’t stand her personally, she is on the ticking clock like ‘jolly fat man’ Alex Salmond towards the exit.

Labour MP Jim McGovern said the burning of the report was reminiscent to the actions of the Nazis burning books before the Second World War.

Funny how many different types of Scots recognise the connection between 1930’s Germany and 2014 Scotland under the SNP.

"I have quite often read books and followed documentaries about pre-war Germany, and one of them was where ... the National Socialist Party, which became obviously the Nazis, burned the books. Yesterday, apparently, SNP elected members filmed themselves burning copies of the Smith Commission report."
Lord Smith, author of the report responded:

"I'm chairman of the Green Investment Bank - I'd rather they had recycled them."

I expect many copies will be!

So, there will be a farce of a disciplinary hearing in the SNP, the way I found they operate is to effective accuse you of being guilty and for you to prove you are innocent. You have to explain yourself, my "hearing" which I blogged on shows how corrupt the SNP system actually is, justice isn't part of it in the same way it wasn't of the Nazis Courts.

During the Nazis era, this is exactly how they operate, accusation equals guilt.

Interim leader of Scottish Labour, Anas Sarwar, called on Sturgeon to issue a personal apology to Lord Smith for the behaviour of her councillors.

Don’t see that happen, the SNP leadership doesn’t take responsibility for anything.

Unsurprisingly many nationalists rose to the defence of the councillors in defiance of the SNP leadership, it seems Sturgeon isn’t just unpopular, no one respects her authority either.

I will be putting up a ‘director’s cut’ of these fools, you should listen to the voice of the main star in the video, he comes across in my mind as a complete cretin which begs the question, how can he be employed as a researcher!

Obviously there are a few bams in Paisley who like to film their stupidity for the rest of the world to see!

And they are all close to the senior leadership surrounding unpopular Nicola Sturgeon’ Nicola likes them thick to secure her position, you only have to look at Glasgow SNP, wall to wall cretins down in councillor group.