Nick Clegg makes the Scottish LibDems, the Scottish ‘Ratners’ as their vote collapses due to massive Scottish public backlash, further to fall yet! 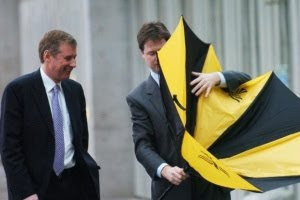 If you are a Liberal Democrat at the moment it is an unhappy time, your support has fallen through the floor in the same manner that Gerald Ranter by a few words sunk his company, Ratners.

A moment of madness by a few quislings sold out the entire party and put them into semi permanent servitude to the Tories.

That is the state of play.

In Scotland, the knock on effect is that support for the Liberal Democrats in Scotland has fallen by more than half since the last Holyrood elections.

And like a toxic product there is still further to fall, after abusing the public’s trust the party now the aftermath of public backlash.

Stick in the Coalition cuts on services and jobs coming from Westminster and it’s a black hole.

For the Scottish Tories who are looking for a new narrative, the picture is also bleak, their low is getting lower.

Annabel Goldie is in trouble; she is like the survivor of a torpedo, bobbing about in the North Altantic, surround by pitch blackness crying out for help.

Recently a lack of water (ideas) saw her deranged and start swearing through panic, poor soul and her a Church Elder too.

She will stay afloat till May 2011 then the sharks in her own party will be circling as they smell blood in the water.

Unpopular Governments always take a hit as the public vent their anger but Tavish Scott’s LibDems at Holyrood aren’t in power so the seepage of what Clegg, Alexander, Cable and Laws have done is travelling north.

“The timing of this poll is significant, coinciding, as it did, with the increase in VAT to 20% on January 4 and following the student protests pre-Christmas over fee increases. The adverse publicity heaped on the LibDems, in particular over broken promises on student fees, has hit home. While, initially, their role in the Coalition did not affect their standing with Scottish voters, the tide has clearly turned against them﻿. With Conservative support also dropping by 3% since August to 9%, the Coalition austerity measures are not going down well with Scottish voters.”

So, votes are up for grabs as other parties see the disaffected as a route to power at Holyrood.

But you can’t use PR to get it; you need to produce policies of substance, in detail and plenty of it.

To get the vote, you have to produce a case.

At present the Labour Party are the recipients of the surge in sentiment against the Westminster Coalition, but they are using the Tory trick of not having policies just protest.

We know what they are shouting about, they just aren’t prepared to tell us what they would cut.

Someone at some point is going to get the shaft.

Unless radical ideas on things like public sector reform are brought in, which will change the very nature of delivery and structure so long overdue?

Whoever can construct a new narrative of Scotland and present it in detail may pull off a victory.

But it has to be substance, steak not the peas.

The Lib Dems may rally but one stock in your company falls by your own hand it is pretty hard to turn it round, the Lib Dems like any political parties are super tankers, they don’t stop on a dime.

And as such they may not be able to change course until after May 2011.

Either way, they are tied to Clegg, Alexander, Cable and Laws who are so toxic that they present a liability to the Scottish Lib Dems.

Holyrood 2011 is an interesting fight.

George Laird
The Campaign for Human Rights at Glasgow University
Posted by G Laird at 2:20 PM