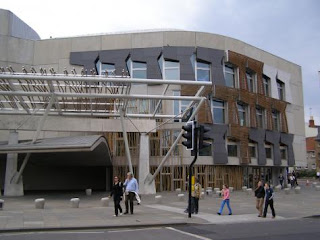 For sometime, I have been saying things look bad and we maybe heading towards a double dip recession.

Now, Economists have issued a growth warning for the Scottish economy because they believe that Scotland will be hit harder than the rest of the UK.

Latest figures show Britain is teetering on the brink of a double-dip recession.

And we are going in.

Because no one is planning for growth, instead we have the bizarre situation that they are hoping for growth.

And you can’t have a country’s economy based on hope.

When thousands of people flood the jobs market after being made redundant from the public sector, businesses right across the board will suffer, they in turn will sack people.

And many businesses will go to the wall.

Closely followed by people who can’t pay their mortgages and or have racked up huge debt which they can’t serve!

In a capitalist economy there are winners and losers, we are now entering a time when losers are going to lose big.

The Housing bubble is a prime example of how markets were manipulated for profit, well the wheels have fell off that band wagon as the sub prime mortgage scandal proved.

And now the same people are making money packaging and reselling the debt.

At the same time banks haven’t been willing to lend either, this is a problem.

What is needed is a new banking system which can challenge the stranglehold of the big banks cartel.

This would address the problem of lending to business and paying savers a decent return on savings is sorely needed to encourage saving as a part of normal household activity.

Things are bad but it can be solved.

Scotland needs a new state controlled Bank in Scotland on a par with HBOS and Royal Bank of Scotland.

If we are going to invest in the future of this country shouldn’t we have the mechanism to do it that works?

George Laird
The Campaign for Human Rights at Glasgow University
Posted by G Laird at 3:19 PM

Fear not George The Time of snp economic numptry comes to a close
The golden era of Iain Gray is soon to begin Scotland will be a "land flowing with milk and honey."


And the dark night of Nationalist folly finally ends

I have no fear!

"The golden era of Iain Gray is soon to begin Scotland will be a "land flowing with milk and honey."

Once a year, Iain Gray will let the poor see him eating rich food through a window.

Just to remind people to be aspirational!

We don't need a Labour 'reign of hell', 8 years was enough thanks.

Sorry I thought you were being sarcastic, th e Snp are terrible and labour will be equally worthless , just they will make sure all their sons and daughters will have a job first.