Colin Fox reaches out to Solidarity supporters, there will be no united left until the SSP do a ‘deal’ with Scotland’s Nelson Mandela c/o Barlinnie 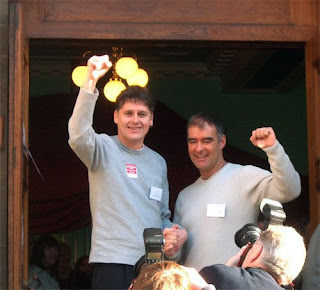 Politics is some part is all about opportunity and timing.

With Tommy Sheridan continuing the fight for ‘truth, justice and the America way’ in Barlinnie at the moment, Colin Fox, a senior Scottish Socialist Party figure has raised the prospect of reuniting with supporters of disgraced politician Tommy Sheridan.

The Tommy Sheridan Camp isn’t going to cross the floor to join you or the SSP.

In their eyes you committed a ‘crime’.

You helped put their leader in prison.

Colin Fox has told BBC Scotland that he backed unity between the SSP and Sheridan's breakaway Solidarity movement.

But the brave Colin wants to first rub humiliation into the faces of Sheridan’s Gang; they would have to accept his jail term for perjury.

"There is virtually nothing that distinguishes the Scottish Socialist Party and Solidarity other than this issue of Tommy Sheridan."

And it was Tommy Sheridan who helped make SSP Scotland's fifth-largest party, with six MSPs.
Sheridan had a certain style which Fox and his cohorts lacked in spades.

Fox and your crew got their doughy arses kicked at the ballot box.

However both parties have been out of parliament since the 2007 election and in order to have a united left, there has to be a radical shift, to left of centre politics.

And even then the Sheridan issue has to be dealt with.

The Scottish Socialist Party has to do a deal with Sheridan himself.

Or there will be no united left.

"If people accept Tommy Sheridan lied, he sued a newspaper over stories he knew to be true, he conspired with others to tell lies and he vilified who dared stand up to him, then I think we can go forward."

The Sheridan Case is odd, we all think he is guilty, we all realise that the SSP got shabby treatment but they didn’t get the sympathy vote.

They looked like they were gloating all the time.

Solidarity national secretary Graeme McIver said senior SSP figures had been "discredited in the eyes of active socialists and trade unionists across the UK".
Won the war but lost the peace!

"I know that on campaigns, on picket lines across Scotland, I'll be standing there with SSP members."

So, the SSP if it wants a united left, it will have to see Tommy Sheridan c/o Barlinnie Prison.

Where Sheridan will be practicing to be Scotland’s Nelson Mandela!

George Laird
The Campaign for Human Rights at Glasgow University
Posted by G Laird at 3:18 PM

The so-called Scottish Left are almost as hysterically funny, as my favourite TV Programme, "Shameless" - indeed they have much in common!

Now boy's and girls, would you all just please fuck-off, and preferably die somewhere... how about North Korea? And take Sheridan and wife with you!

You never had the answer to Scotlands problems, you don't now, and never will! Why? Because you fail to understand the question - its that simple!