Former Labour MP David Chaytor jailed for 18 months, he gets a light sentence by Mr Justice Saunders dressed up as ‘significant penalty’ 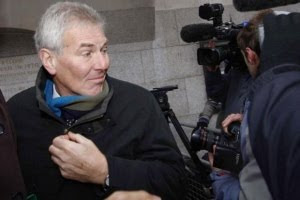 One thing which is hard to escape from is the truth, it will always come out, justice make take time and in some cases it is denied but every now and then Justice prevails.

Regardless of his politics, it is a sad end to public life for anyone.

David Chaytor was caught up in a culture of greed where expenses were seen as a second salary by MPs.

This situation is new and goes back to the time of Margaret Thatcher were MPs were encouraged to ramp up their expense as a way of circumventing public disquiet about their salaries.

Althought there was a culture, David Chaytor wasn’t an innocent victim; he was a highly educated man who in a previous life was a lecturer.

He should have known better.

Today in the press he is said to be a broken man as the first politician to be convicted and sentenced over the Westminster expenses scandal.

Although sentenced to 18 months, in theory he could be out of prison by May 2011 under early release rules for non-violent prisoners.

At 61, Chaytor is someone who poses a low risk to the public.

In his former seat of Bury, there was no sympathy for the ex Labour MP as one member of the public said:

“He has got what he deserves.”

So, what did Chaytor do to deserve prison?

He forged tenancy documents and invoices to falsely claim more than £22,000 of taxpayers’ money for rent and computer work from the Commons authorities.

And he early on tried to write that off as ‘admin errors’.

David Chaytor has more misery coming his way as he faces a potential six-figure legal bill.

In politics, the Chaytor situation was quickly seized on by Liberal Democrat candidate Elwyn Watkins who said:

“The Labour Party is rotten. They lie, they cheat and, in the case of David Chaytor, they steal. We have seen the worst of Labour here in Oldham East and Saddleworth, spreading vicious lies to spread fear and pit constituent against constituent. We deserve better than Labour here.”

I think that Mr. Watkins making capital out of this situation shows that he is just an opportunist; such talk won’t curry favour with the public.

“These false claims were made in breach of the high degree of trust placed in MPs to only make legitimate claims. These offences have wider and more important consequences than is to be found in other breach of trust cases.”

Saunders added that a significant penalty was needed to restore public faith in the system.

The system is corrupt and this is just a paper over a very large crack.

When the ‘Labour 3’ where cut adrift by Labour Party bosses they were seen as the goats for public sacrifice, the rest quietly paid back money and kept their heads down.

This was as much a Party problem as Parliamentary one and Parties just adopted the classic, ‘don’t ask, don’t tell’ regarding expenses, it was an open secret which only came to full public attention by the work of an American reporter called Heather Brooke.

She started a chain of events by being willing to have the fight with Labour Speaker Michael Martin, the former Springburn MP dubbed ‘Gorbals Mick’.

As Speaker of the House of Commons, he acted like a shop steward protecting MPs and shielding them from scrutiny.

When the Labour 3 hit the courts, their first port of call was to claim the court had no jurisdiction because they said that the Bill of Rights 1689 meant they were protected by parliamentary privilege.

That was as they call it ‘chancing their arm’ and the judge threw that argument out on its ear pretty quick.

The Bill of Rights 1689 didn’t legalise crime by MPs.

As that little piece of legal manoeuvring was going on Chaytor denied the charges.

Then after the parliamentary privilege was thrown out he pled guilty to three counts of false accounting between November 2005 and January 2008.

This is not the way to behave in public life, the public gives everyone a clean sheet when they start out and are pretty forgiving; they ask that their trust is not abused, they ask that you try your best on their behalf and if you make a mistake you are honest enough to admit it.

Labour MP David Chaytor abused his trust while in public office repeatedly, he is solely responsible for his situation but politics aside, it is a sad end for someone who was given so much and was blinded by greed.
Yours sincerely

George Laird
The Campaign for Human Rights at Glasgow University
Posted by G Laird at 1:28 PM