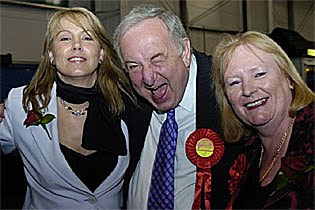 He is the master of the inane Freedom of Information Request.

But talentless Labour MSP George Foulkes has a big mouth as well.

Blowhard is an expression best summing him up.

He is the bam’s bam!

Yesterday saw George Foulkes threatened with expulsion from the Holyrood Chamber as he was reprimanded by Presiding Officer Alex Fergusson for earlier shouting the word "charlatan."

He has been a "charlatan" for years but hasn’t seen fit to broadcast that fact.

When ‘Lord’ Foulkes opened his gub because his bottom wasn’t available by way of being tightly pressed into a seat, he reminds us that anyone can be a politician.

The Lothians MSP claimed he did not consider the word to be disrespectful, but the presiding officer Alex Fergusson told him that it was the manner of his intervention which had been discourteous.

With Holyrood Elections looming and panic setting in among MSPs don’t be surprised at more eruptions as party politicking like a leaky dam will burst.

George Foulkes is retiring and won’t be missed, but who in the Labour Group will take up the mantle of the village idiot?

Or could this be the time of Karen Whitefield?

The House of Lords!

What is the betting he will cause trouble there?

George Laird
The Campaign for Human Rights at Glasgow University
Posted by G Laird at 1:36 PM

Who's the posh pump on the left, George? Or does she only look good as she's next to the other two?