Osama Bin Laden killed in U.S. operation, wanted dead or alive with a £25 million bounty on his head by FBI, history unfolds during historic operation 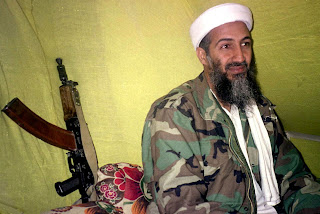 The world has been searching for the world’s most wanted terrorist, Osama bin Laden for decades.

But rather than being found in a cave in Tora Bora, he has been killed in a helicopter raid on a mansion in Pakistan.

Four helicopters launched an attack in the Bilal area of Abbottabad, about 60 miles north of Islamabad, the capital of Pakistan.

And it was American President Barack Obama who announced the death in a televised statement in Washington.

In the end Obama said a small team of Americans killed Osama bin Laden by shooting him in the head.

The operation to kill the al Qaida chief was approved personally by President Obama after he received undisclosed intelligence information.

Bin Laden can now be taken off the FBI most wanted list where he had a price of £25million on his head, dead or alive.

As well as Bin Laden, one of his sons was also killed in the raid along with three others.

Pakistani officials and a witness said bin Laden’s guards opened fire from the roof of the building and a US chopper was brought down.

The US said no Americans were harmed in the successful raid.

"I heard a thundering sound, followed by heavy firing. Then firing suddenly stopped. Then more thundering, then a big blast."

"In the morning when we went out to see what happened, some helicopter wreckage was lying in an open field."

News of the killing is being celebrated in America, where thousands took to the streets in Washington around the White House to show their joy, chanting "U-S-A, U-S-A" and waving American flags.

The president said the death of bin Laden was "the most significant achievement to date in our nation’s effort to defeat al Qaida".

"His death does not mark the end of our effort. There’s no doubt al Qaida will continue to pursue attacks against us. We must and we will remain vigilant."

As Osama Bin Laden dies, people in the Arab world see their seeds of democracy flourish not be the bullet or the bomb but the cry of freedom.

George Laird
The Campaign for Human Rights at Glasgow University
Posted by G Laird at 12:31 PM

Good way of describing, and nice post to get information about my presentation subject matter, which i am going to deliver in school.

Hello there, I discovered your website by means of
Google whilst looking for a similar topic, your
site came up, it seems great. I have bookmarked it in my google bookmarks.

I'm now not certain where you're getting your
information, however good topic. I must spend a while
finding out more or figuring out more.
Thank you for great information I was searching for this information for my mission.

It's an awesome post for all the online users; they will obtain benefit from it I am sure.

Hi there! This article couldn't be written any better! Going through this article reminds me of my previous roommate! He continually kept preaching about this. I most certainly will forward this post to him. Fairly certain he's going to have a very good read.
Thank you for sharing!

Here is my weblog :: Here