Labour MP David Cairns passes away after losing fight against acute pancreatitis, his passing is a great loss to the Scottish Political Community 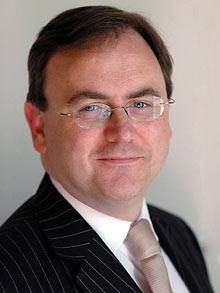 He was a great fighter of Labour’s cause over the years, and his passing is will be missed by his friends, family and politicians across the spectrum.

Politics is in some ways a harsh and unforgiving business but at certain times, people put aside politics.

This is one such occasion.

"David's untimely death is a huge loss to parliament and politics in this country."

David Cairns was born and raised in Greenock, the town he later represented in the Commons.

Tributes to Mr Cairns have flooded in from across the Labour Party when the news was announced and I am sure that the rank and file of the SNP members would wish to join in those tributes.

David Cairns had an unusual route into front line politics, he attended Notre Dame High School, training as a priest before finding his way into Labour while director of the Christian Socialist Movement.

In his later career, he became the UK minister to resign during a period when rebel MPs had been calling for a leadership contest during Gordon Brown's time as prime minister.

Mr Cairns had said the time had come to "allow a leadership debate to run its course".

He saw the writing on the wall for Labour’s re-election chances.

Before becoming an MP, parliament had to reverse a law dating back to the 19th century, which banned former Catholic priests from taking up a seat.

He was returned as MP for Inverclyde in the 2005 election and was appointed as a Scotland Office minister.

"Our thoughts are with his partner Dermot, his father John and his brother Billy and all his many friends and family."

"He was a man of enormous dignity, courage and outstanding intellect. His time as a minister was characterised by good humour, good judgement and good character. He had so much more to give his party and his country."

"David will be missed beyond measure as a former minister, as an MP, as a friend and a colleague by many people and my heart especially goes out to his partner Dermot and his family in Scotland. A highly effective minister of state in the Scottish Office, he was Labour through and through and yet was much-respected across the political divide."

"This is such a huge loss. People are just shell-shocked. David was a colleague and a friend to so many people and highly respected. He was a big talking point in Inverclyde - people were always asking how he was doing these last few weeks."

"David's life was dedicated to public service. He was a committed and conscientious constituency MP, an excellent government minister and a passionate campaigner for social justice, equality and opportunity. But more than that, David was, quite simply, a good man, with time for everyone and a wonderful sense of humour, which made him a delight to be around."

"David was a gifted and popular MP with a political instinct that was second to none. He was absolutely committed to the Labour movement and to Labour's electoral success."

Although acute pancreatitis, an inflammation of the pancreas is very much a treatable condition, it can be also life-threatening.

He will be a great loss to his family, his constituency, the Labour Party and Scotland.

George Laird
The Campaign for Human Rights at Glasgow University
Posted by G Laird at 2:38 PM