The ‘charge of the budlite brigade’ in Kelvingrove Park by Police on horseback into crowd puts damper on Royal Wedding Street Party! 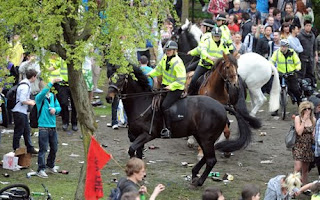 The ‘battle for Kelvingrove park’ is over but the cleaning up after the unofficial royal wedding street party which turned into a riot has cost the Labour Council of shame £40,000.

To combat the mess, the Parkies were tactically deployed to clear up mountains of litter left by an estimated 6,000 revellers who were boozing.

“The cost will be substantial and it’s unfortunate this was the image of Glasgow seen around the world.”

Maybe the press should only report on the ‘nice’ people!

After the clean-up started on Friday night it took until midday before things returned to normal.

Whatever normal is there!

Glasgow City Council in an attempt to stop the party posted a notice on its website last Thursday.

They warned people not to attend the party in Kelvingrove organised by students on Facebook.

How many of the students were from the human rights abusing Glasgow University which is beside the park is anyone’s guess.

In the ‘charge of the budlite brigade’ by Police on horseback, they rode into a crowd to break up a fight then it all went pear shape.

From that point the event descended into mayhem and anarchy resulting in a total of 22 people being carted off to the pokey and 11 police officers were injured.

There are no reports of any injuries to the horses but there is probably a good bit of horseshit lying around which the ‘parkies’ had to scoop up!

Three men, aged 21, 30, and 46, are expected to appear at Glasgow Sheriff Court today, while 17 others will appear in court at a later date.

"Remember: its a public park and we'll be doing our best to help everyone enjoy themselves in a safe environment, so take it easy, help us keep the rubbish under control and remember that there will be other folk in the park who aren't quite as Royalist/Party mad as ourselves”.

"We've got no right to spoil their day, it is a public place after all. The council and police are aware of the situation."

I wonder if JJ Gardner and Robbie Seath have checked their mail to see if Glasgow’s Labour Council of shame is passing on the clean up bill?

George Laird
The Campaign for Human Rights at Glasgow University
Posted by G Laird at 1:46 PM