Labour MSP Margaret Curran and the Labour Party continue to spread fear of knife crime in order to try and get votes, fair trials mean nothing to them 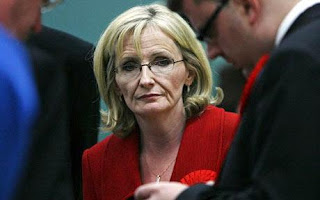 One of the Labour Party campaigns in Scotland is their automatic prison sentences for people who are found in possession of a knife.

On the face of it, it seems sensible at a cursory glance but if you stop and think the proposal through to its logical conclusion, you will see the idea is fundamental flawed.

What the Labour Party is seeking to introduce is the concept of guilty until proven innocent.

Rather than Judges exercising discretion they would be reduced to merely rubber stamping political decisions.

The Labour proposal has attracted 30,000 signatures based on its flawed emotive language.

Knife crime is a problem but rather than Labour’s one size fits all badly thought-out plan, the punishment for using a knife to inflict injury would be the sensible solution.

The sentences for using an offensive weapon on someone should be so draconian that knife thugs will understand that their sentence will stretch into decades in some cases.

There should be also no automatic early release for such people, the SNP Government is currently looking at the issue of early release and will bring proposals forward.

In trying to sell their warped idea, Labour has introduced the notion Judges would only pass non-custodial sentences in exceptional circumstances.

So, what would the criteria of exceptional circumstances be?

The Labour Party like the rest of their attempts to introduce bad law isn’t spelling that out.

"When we doubled the sentence for knife crime it was the right thing to do but it has not made the impact that the public wanted”.

That is because the Labour Executive never addressed the issue of using an offensive weapon rather than carrying.

It is their continual failure over 8 years in power at Holyrood that stands as their record.

It is essential for democracy that Scotland has an independent judiciary free from political control.

If the Labour and Tories vote in an amendment to the SNP government's flagship Criminal Justice Bill on Wednesday, the SNP should scrap the bill.

There has been enough bad law passed.

"Knife crime is the number one issue in my constituency and it is one where the SNP have been completely complacent”.

And this is from a woman who attempted to lie her way into public office in the Glasgow East By-election!
She fails to mention that under the SNP Government, crime is falling but then the truth always plays second fiddle to spreading fear in the Labour Party.

George Laird
The Campaign for Human Rights at Glasgow University
Posted by G Laird at 5:43 PM

Labour must be doing something right

George does he not know we cant speak Portuguese???

I don't speak spanish either.

Only if it free.

Did I ever tell you I got an invite to lunch at Holyrood for free once?

I turned it down because of a previous appointment on the same day.

Still it was nice to be asked.