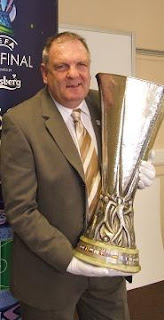 You say the word Tory and the next word out of your mouth is sleaze.

You say the word Labour and the next word out of your mouth is expenses.

They think your money is their money.

So, the next Labour Party member to hit the blades is Labour Councillor Alistair Watson who has resigned citing poor health.

Since his health is so poor does that mean he will be stepping down as a Labour Councillor?

No, there is no sign of that at present.

Labour Councillor Alistair Watson’s health rather sudden went downhill when Audit Scotland was asked to investigate the expenses of executives at the country’s biggest transport quango, the Strathcyde Passenger Transport.

Part of Labour Councillor Watson’s problem was a trip that coincided with a European match involving Rangers Football Club in Manchester in May 2008.

Watson’s ticket was paid for by City Building, a Glasgow-based construction firm which was formerly part of the Glasgow City Council.

City Building is effectively a Labour Party controlled quango as demonstrated by ex general sec of the Labour Party Lesley Quinn who walked straight into the job of business development manager.

So, what is the best way to kill an investigation into you by Audit Scotland, quite simple resign!

Is not funny that the Glasgow Labour Party members seem particularly susceptible to ill health when it comes to people investigating their financial probity?

I wonder if he will set up a shrine at the Labour controlled Glasgow City Chambers so that others can pilgrimage to it?
Yours sincerely

George Laird
The Campaign for Human Rights at Glasgow University
Posted by G Laird at 3:55 PM