Gerald and Kate McCann's right to privacy doesn't supersede Goncalo Amaral's right to freedom of speech, the injunction against him should be revoked 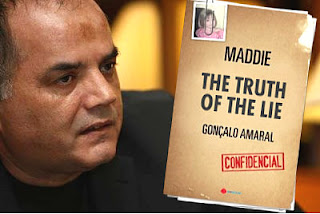 Freedom of speech is important.

In Portugal there is a court case in progress regarding this very issue.

On one side is Team McCann seeking to block Goncalo Amaral's publication, ‘Maddie, the truth of a Lie’.

On the other is Goncalo Amaral, former Police Officer involved in the hunt for Madeleine McCann.

The issue is, does the McCann’s right to privacy supersede Goncalo Amaral right to freedom of speech?

The McCann’s have put forward an unsubstantiated theory that their daughter was abducted by a third party while they were eating and drinking in a Tapas bar.

There is no physical evidence to support their claim.

They have repeatedly changed their version of events.

Refused to co-operate with the Police

Forensic evidence has been found that indicates that someone previously died in the apartment they rented.

There is no record prior to them renting the apartment of anyone ever been recorded as having died there.

Traces of death and human blood were further found in their holiday apartment and hired rental car.

Gerald Patrick McCann when asked to explain this replied;

On the other side of the argument Goncalo Amaral's stance is that his book represents free speech and the material contained in it is already available in the public domain from the case files.

He is also backed by several witnesses who believe that Madeleine McCann is dead and she died in apartment 5A which was rented by her parents.

So, in weighing the issues the Portuguese Judge has to make a decision does the McCann’s right to privacy supersede Goncalo Amaral's right to freedom of speech?

I believe that the answer to this fundamental question is no.

The McCann’s claims are unsubstantiated subjective opinion and therefore on that basis their case is without merit.

Subsequently their claim for damages of 1.2m euros (£1.08m) is also without merit.

The temporary injunction should therefore be lifted by the Judge and the case should be found in favour of Goncalo Amaral.

Hopefully, the Judge will reach the correct decision after careful consideration of the evidence presented by both parties.

George Laird
The Campaign for Human Rights at Glasgow University
Posted by G Laird at 10:28 PM

Lets not also forget what seems to matter to the McCanns most...Money, their reputation ,their home and then possibly two of their remaining three children.

The FUND is based on an alleged abduction by the parents. There is no proof of an abduction but there is a video where McCann says himself. 'There is no evidence to implicate us in her death'...Slip of the tongue? I think not.

Something else that may be of interest.

Euro Weekly News in Spain printed a little of this statement and were ordered to remove it. They did so.

A petition asking for signatures to re open the case..nearing 1,600..A couple of people mentioned the Gaspar Payne statement and the Petition was closed..

There have been other books one in particular written by another ex PJ that also claims Madeleine is dead and her body thrown out to sea...The McCanns did not sue or even mention the book.

Amaral has a small part of this Gaspar statement in his book..he is being sued

This statement was given By Dr.Gaspar in May..the Leicester Police held on to it until October???

It is my belief that this whole case revolves around this statement and that it not be allowed into the Public domain...

The McCanns have entered a snake pit and the snakes are biting.

What is it about this statement that seems to now be a 'Time Bomb' waiting to go off?...Sooner or later a Portuguese Journalist is going to ask the million dollar question. Will the truth then be known?

A reporter doing what he should do asking questions..

Funny a whole year and still these two try to continue with this Jihad
against Dr Amaral,

Tony Parsons that bigot ,should hold his head in shame in supporting these two.