Tough day at the Office: Scottish Conservatives say to Prime Minister Theresa May that they must get an opt out on fishing if they are to support an extension to transition period, given the way contract law works, the way the EU works, and the EU 27, that request is a tough ask, extension period means all the rules stay in place, all or nothing, no middle ground 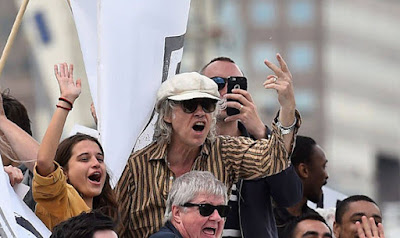 You may have noticed in the press that there was an anti Brexit march in asking for a second vote. The march organised by the political elite was all about attempting to keep their networking links in . In order to do so, this would mean the staying in the EU. The EU is corrupt, some say we should have asked for reform, over the years, we did, 72 times, we asked for specific measures and 72 times our voices were ignored.

Although there is talk of a reformed EU, I doubt the people currently controlling it have the political will to do so. These people want a United States of with an un-elected EU Commission in charge, so long as they get ‘their cut’ and a seat at the table.

23rd June 2016, the voted to leave, 29th March 2017, we sent in the letter to leave, this set the two year clock ticking. Now, there is talk about extending the transition period by the Prime Minister Theresa May. Brexit Secretary Dominic Raab has admitted the UK Government is considering an extension.

I am not in favour of extension because we will find ourselves in a position were we will have shown to be weak. The national interest is not solved by extended transition, but by showing strength, we voted to leave, we should leave. There is no pressure on the to agree a future deal while we are in the EU, and we shouldn’t act like there is. I am one of those people who favour ‘hard Brexit’, the EU wanted to punish us for leaving, and have shown themselves to be less than agreeable to a fair solution.

The issue of the transition extension has put the Prime Minister at loggerheads with Scots Tories, who see an extension as a betrayal of ’s fishing industry. We were told that the UK would take back control of its fishing waters on Brexit Day next March, now we get a story, no, it will now be 2020. One thing which isn’t about Brexit is the Scottish Conservatives attempt to win the Holyrood contest of 2021. This is the most important election ever to be held in Holyrood history and the Scottish Conservatives see themselves in with a chance.

Scottish Secretary David Mundell has contacted Number 10 to express his concerns, and ask that there should be an opt-out for the fishing industry from the CFP. That will not happen, if the EU ‘contract’ is extended, then all rights are extended, which could see a legal challenge from either the EU, foreign governments or foreign fishermen.

You can add to that scenario that the EU27 would agree to this in principle or by deed, especially those whose trawlers fish in waters.
It only takes one to say no!

“I could not support a deal that would include staying in the Common Fisheries Policy beyond December 2020.”

“What's important is that we send out a very strong signal to everyone who is negotiating on behalf of the that this is an issue that is extremely important for our Scottish communities that we represent. We cannot have the CFP.”

Scottish Conservatives need a big boost to kick start their attempt to win Holyrood, and if you ask the question, ‘what is that got to do with the price of fish’; well getting the opt out is certainly a big win for them. One thing the Scottish Conservatives have been championing is the fishing industry, probably more so than any other political party in . Conservative Peer Ian Duncan led the charge while an MEP for years, while the SNP under Alex Salmond and Nicola Sturgeon were willing to sell the Scottish fishermen down the river without a second thought.

The strength of feeling on this issue is so strong that it might lead to Scootish Conservatives being prepared to vote against the Government, even possibly voting down the Chancellor’s Budget. This then puts Theresa May in a difficult place, as if it wasn’t hard enough at present with ‘rebel talk’ all around her and tempers wearing rather thin.

Brexit Secretary Dominic Raab calling for goodwill and "a bit of oomph on both sides" to get the exit deal over the line might not happen. It seems that some people are apparently working on the leadership bid for the party from the Brexiteer camp.

Scottish Secretary David Mundell has a valid point when he stated:

“It would be rather odd if we ended up in that bridging temporary mechanism without a route out. It could be time-limited, there could be another mechanism. I probably wouldn’t call it an ejector seat but there needs to be something which allows us to control how long we are there for to avoid any sense that we are left indefinitely in a sort of customs union limbo. That wouldn’t be acceptable.”

No deal is better than a bad deal in my opinion, in relation to the Irish border, I would throw that ball back into the EU’s court and say to them, if you want a border in , you build it, run it and talk the flak for it. I would then sit back and watch the Irish have their fight with the EU.

Who knows maybe they will say time up and call it a day with as well!

The Prime Minister is said to be 95% there in getting agreements for the Brexit deal but this is a case were she needs 100 over 100, a perfect score and then sell it to her MPs and the Country.

On the border, the PM said:

“The commitment to avoiding a hard border is one that this House emphatically endorsed and enshrined in law in the Withdrawal Act earlier this year. As I set out last week, the original backstop proposal from the EU was one we could not accept, as it would mean creating a customs border down the Irish Sea and breaking up the integrity of the . I do not believe that any UK Prime Minister could ever accept this. And I certainly will not.”

So, basically we could be seeing all or nothing, nothing being hard Brexit, which is were I thought we should be right from the start. This is politics and like football, anything can happen, even if it seems bizarre and totally out of the left field.

Finally, the Brexit march in is meaningless, the government and the people are heading towards Brexit, the elites will continue to press for another referendum vote, but that won’t happen. When you see people like Nicola Sturgeon and Labour MP Chuka Umunna supporting this march, you know one thing if you voted leave, you did the right thing!

George Laird
The Campaign for Human Rights at
Posted by G Laird at 2:03 PM

I'll be so glad when Brexit is over and done with, George. Judging by what you've said though, it's probably going to turn out alright.

‘I find it all very confusing when the Scottish Tories appear to be the only political party backing the Scottish fishermen. The nationalist appear to have abandoned them, lie@bour are nowhere. Strange times we live in when the only party worth voting for are the Tories...and I'm still a socialist.

Does your website have a contact page? I'm having a tough
time locating it but, I'd like to shoot you an e-mail.
I've got some creative ideas for your blog you might be interested in hearing.
Either way, great site and I look forward to seeing it develop
over time.

Thanks a bunch for sharing this with all of us you really understand what you are talking approximately!
Bookmarked. Kindly additionally visit my site =).
We could have a link exchange agreement among us!

This is the right webpage for everyone who would like to find
out about this topic. You understand a whole lot its almost tough to argue with you (not
that I actually will need to?HaHa). You certainly put a new spin on a subject which has been discussed for a
long time. Great stuff, just excellent!

Hi to every body, it's my first visit of this website; this web site includes
awesome and really fine data for readers.