Mainstream Media On Trial; Tommy Robinson Vows to Sue Sky after interview with Jason Farrell, there should be one agenda in the media, pure truth, as someone who grew up watching ‘World in Action’, ‘Weekend World’ and ‘Panorama’, where have all the good investigative reporters gone, because we need them back now 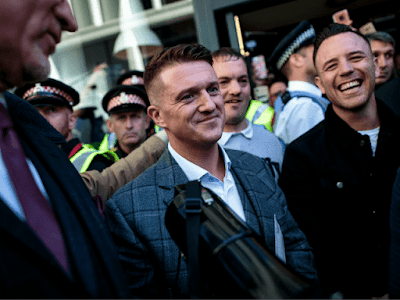 Trust in the mainstream media has fallen, the reason is simple, a biased agenda is presented as news, when in fact it is slanted in an attempt to lead the public towards a certain opinion. Fake News is a term used by US President Donald Trump, the reason it caught on because it was catchy and the truth. For years people placed their trust in our news organisations with the BBC seen as a shining example. In the global world, to get the real truth, you have to be like a detective, searching out several sources.

The problem with fake news done by the mainstream media is that they throw it out in the public domain as facts, the drawback is of course, if they get caught out publicly lying or distorting the truth.

And when that happens, they don’t get to take it back, it’s out there!

When Tommy Robinson was released from prison, Sky News was waiting at the gate to grab a quick interview or comment, nothing unusual in that the press do this all the time, what was interesting was Robinson after his ordeal, saying that Sky News was fake news. This isn’t some mom and pop operation, Sky is a big player in this country, a rival to BBC news. Although Tommy Robinson didn’t do an interview when he left prison, he accepted an invitation to do an interview later with Sky.

You would think that given previous history that Sky News would be at pains to make sure that from their side everything was 100% correct and above board. You would expect that their narrative would be based on facts, researched and double checked for accuracy, what you and I would think of as the bare minimum.

The interview between Sky News and Tommy Robinson was hyped like a ‘boxing match’, but in the end, the interviewer Jason Farrell done such a bad job, he ended up looking bad, and in boxing, if you get a bad fighter facing a good fighter, it can end up dragging the match down.

After the interview, Tommy Robinson said this:

“A lot of people asked why I sat down with Sky News. I sat down with Sky News to expose them. I knew what they was going to do [sic], they’ve done it to me for years — but I wanted you, the public, to see that.”
Tommy Robinson says that recent headlines by Sky about him not caring if he incites fear of Muslims are based on misquotes and deceptive editing.

“[The] headline that’s gone all around the world says that Tommy Robinson says he doesn’t care if he — as in me — incites fear against Muslims, the next bit of this story is that now Tommy Robinson has vowed to sue Sky News.

Robinson in the video said:

“In the(Sky News) voiceover he leads the public to believe that he’s asked me about my opinions causing fear into Muslims [sic], and then he cuts and edits an answer I give to a completely different question that’s completely out of context, so it makes it look like I’m answering the question that he’s put in his voiceover, and it has me saying that I don’t care if it instils fear, so long as it prevents the rape of young children”.

Like it or not, Tommy Robinson has now a high public profile than ever before, incidents like what happened at Sky News has rocketed that profile even higher.

When you add in this video, you cannot help but ask, is there an agenda at work here?

Lying may get someone a short term gain, in the long run; the truth will do the job permanently to end them, usually that will all be self-inflicted. How many public figures have you seen who end on the scrapheap because of something they said or did, I am sure you can think of plenty.

Finally; if Sky ends up being sued by Tommy Robinson, you can expect a packed court, the real issue here is truth, lies and misinformation, in a wider context, the British mainstream media is on trial. Somewhere along the way, the mainstream media forgot what its job was, it was to find out the wrongs in the world and inform us, no matter who the wrong doer was, or what their position in society was. As someone who grew up watching ‘World in Action’, ‘Weekend World’ and ‘Panorama’, where have all the good investigative reporters gone, because we need them back.

George Laird
The Campaign for Human Rights at Glasgow University
Posted by G Laird at 2:03 PM

Truth be told, I think part of the problem is that the left, once champion of the white working class has seemingly abandoned them, disregarded them as lowlife garbage, and something to be feared. If they paid attention to them and included them in their pushes for diversity and the like, this would probably be less of a problem. In addition, the mainstream media demonises the white working class man as a malevolent thicko, which means that they can't touch Robinson now.