The Scottish Labour Purges: Labour leader Richard Leonard sacks Anas Sarwar and Jackie Baillie in Scottish Labour reshuffle, Anas Sarwar was sacked for “political reasons”, although Anas had a good stint as health spokesman, he should reflect on the backbenches how he got there, in my opinion, , one reason was lacking in leadership, and the other was inability to work as part of the team. 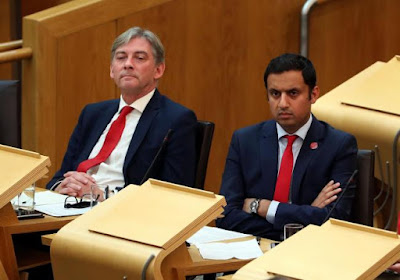 In comedy timing is essential, likewise in politics, it is also essential and generally more pressing. The leadership contest between Anas Sarwar and Richard Leonard didn’t impress me in the way it was conducted from the Sarwar side. In the end, the right person won in Richard Leonard, what transpired in that contest should have been a heads up for Richard Leonard.

Yesterday, Richard Leonard did something which he should have done nearly a year ago, he sacked Anas Sarwar as Shadow Health spokesman. You could make a case that by giving Anas a chance to get onboard with the new leadership, Richard Leonard was being fair.

A Scottish Labour Shadow Cabinet reshuffle was long overdue, you can say one thing about Anas Sarwar’s stint as Health spokesman, he did a decent job, but beyond his brief, his other activities were to prove his undoing, according to Richard Leonard, Anas Sarwar was sacked for “political reasons”.

One of the reasons which more than warranted his removal was his ‘playing the race card’, after he was removed, SNP MSP Humza Yousaf tweeted:

The sense of entitlement is laughable, but the snide question on racism is pure Humza, like Anas Sarwar, Yousaf is a ‘race card player’, in fact, to someone looking at this from the outside, you might be tempted to ask the question;

“are they operating as a double act?”

One big mistake yesterday in the reshuffle was the appointment of Monica Lennon as Health spokesperson, I doubt she will be as good as Anas, he had experience and also knowledge of working in the NHS having been a dentist.

His presentation was pretty good, and he managed to get a lot of mileage at the expense of the SNP. The SNP incompetence in health is a running sore, so there were lots of issues to jump on to use, which is always pretty handy. Although the same issues will be there for Monica Lennon, I doubt she will be as effective as Anas.

Yesterday’s sacking were all about Richard Leonard’s attempt to assert his authority over Scottish Labour which is going through an unhappy time due to the issue of Kezia Dugdale’s court case which has divided the party in how it was managed. Kezia put herself into the position she is in, she wrote what she wanted to write and there followed consequences.

The Labour Party should have not got involved, and left it as a matter between her and the Daily Record, but they did get involved, and it all went sideways when they pulled out of funding her. Once the party had committed, they should have seen it through to the end, even if they thought it would result in a loss.

Kezia Dugdale was lucky that the Daily Record stepped back in to help her, as they promised they would do from the start.

At a recent meeting of Labour MSPs, it was apparently not cordial, which I think explains why Jackie Baillie was shown the door also, however, I wouldn’t have sacked her myself, not for speaking out in favour of Kezia. What I would have said to her was that ‘we are where we are re Kezia, and as the Daily Record is funding her defence’, we need to step back from this infighting’.

This entire episode is a huge mess in how it was handled but Richard Leonard shouldn't carry the can.

If you add in the running sore of Anas Sarwar losing the leadership contest and being seen in the eyes of the Leonard’s camp as part of a briefing operation against the leader, you can only wonder how this will further play out.

One thing that Anas Sarwar better get used to is being on the backbenches for a rather long time.

"The purge of good, capable and committed people goes on merely for standing up for what they believe in. I don’t know whether to be angry or sad. I thought Richard was better than this?"

is so anti Corbyn as leader, it isn’t even funny, he resigned as Scottish Secretary from the Labour Shadow Cabinet in the hope that Corbyn would resigns as leader.

Well that is a bit OTT, but certainly this damage, but there is no such thing as the indispensable man or woman in the Labour Party.

A source said it this episode is further evidence of poor leadership on Richard Leonard:

“You don’t take your two best players off the pitch when you’re in trouble.”

You do when they aren’t acting as Team players!

“Labour is a party more divided than ever, and with this chaotic reshuffle have underlined again just how weak an opposition they are. They've removed their best performers from the frontbench on the same day their media chief confirms he can't take it anymore. This is a bewildering and ridiculous political fiasco. The only two MSPs capable of leading have now been sacked by their increasingly hapless leader. Richard Leonard couldn't lead a circus, even though that's what he increasingly seems to aspire to.”
This is just politicking on the part of Jackson Carlaw, false support for Anas Sarwar and Jackie Baillie, I am sure he would much prefer less able people to be up against, especially since the Conservatives plan to mount a serious bid for Holyrood in 2021.

Nicola Sturgeon joined in to Labour’s woes and taunted Mr Leonard at First Minister’s Questions, she read out a quote from someone in his own party;

“‘Richard has no authority over the group. If he is serious about leading Scottish Labour, he should be apologising”. I could not sum it up any better.”

Finally, Sturgeon has her own problems re leadership, and usually her assessment of anything is usually wrong.

Richard Leonard has nothing to apologise for to anyone, his reshuffle was about picking a new team to work as a team. I wouldn’t have sacked Jackie Baillie because I didn’t think it was necessary, but Anas Sarwar by his own actions crossed his rubicon, hence sacked for “political reasons”. In his time on the backbenches, Anas should reflect on how he got there, one reason was lacking in leadership, and the other was inability to work as part of the team.

George Laird
The Campaign for Human Rughts at
Posted by G Laird at 2:05 PM

Golly, what a silly sausage Richard Leonard is.

He'll have Anas Sarwar plotting against him in Glasgow with other parents of children at the private school. If he sacks Jackie Baillie he'll lose all the support he might hope for from the Cowal Conservative Ladies'Lunch Club which Jackie enjoyed attending.

But maybe things aren't all bad. Rhoda Grant has promised to iron his tie and Neil Findlay is going to get baltic and start tweeting after Dyntasty finishes on CBS drama just before 11 on Friday night.

I'm mainly worried about Monica Lennon because she is such a talented person. Maybe she is worried that Mr Leonard will sack her soon too.

Kezia Dugdale has said she will bite the heads off wombats in the Kakadu Nature Reserve as practice for biting the head off Cybernat General Paul MacCartney and Wings.

Richard Leonard is awful. I know you’re a Labour man George but they are a shambles. Leonard will lead that party now where. You say the right man won the leadership, I’m not so sure any of them would be right. Given what I’ve seen so far I would like to have seen how Anas would have done. Let’s face it he couldn’t be any worse than droopy Dick. Shouting, jiggling his shoulders up and down when he speaks but says nothing of interest em em em that’s all I hear. Quite frankly he’s irritates me as much as Patrick Harvey does. He could be the next Jim Murphy, electoral obliteration in 2021 I suspect. Not more than they deserve.

Care to do a breakdown of why I wrong or present an alternate view?

"Richard Leonard is awful. I know you’re a Labour man George but they are a shambles".

In the last Westminster election, I helped two Conservatives and one Labour get into office.

Forgive me George, I thought you were a Labour Party member from reading this blog, maybe I missed something? I’m also aware that you are a much sought after campaigner, well done on the latest successes.

I meant the nutter with the long post was nuts. But she does have a point about Sarwar plotting and Baillie being a Tory. Not sure Grant would manage to iron a Tie or Lennon has any talent. I wonder if Findlay watches Dynasty...

I meant the one who posted a long reply at the start was nuts. Not you!

“Forgive me George, I thought you were a Labour Party member from reading this blog, maybe I missed something?”

If you look at what is going on in Labour, I think it would be hard to define what that is now with all the infighting.

I am currently in Labour, signed up so I could vote in the leadership election. I don’t think that Labour think much of me, but people still ask me for advice on campaigning. I give it to them, years ago, I used to teach weight training, so I became rather good at it, same with politics.

Lots of people give ‘campaigning’ a go but it works best if you have a feel for it, some people just don’t feel right while doing it because the important person in the conversation should always be the voter. Mostly their feeling is due to lack of training or experience. I like to give someone some advice that may help them or possibly someone they know down the line, regardless if they vote for the candidate. I still believe in public service and what that entails.

“I’m also aware that you are a much sought after campaigner, well done on the latest successes”.

I have had a few people in the Conservatives say to me that they would dearly love me to be on their election campaign. When I did Glasgow North West for Labour, I thought the candidate had doubts about me. After a session, a former Labour cllr told him, she had listen to me on the doorstep and I was brilliant. Then he got to see me talk someone who was a non voter in the street, and then pledge to vote for him.

Thanks for getting back to me, hope you like the blog.