SNP’s Pointless Quest Is Doomed to Failure; SNP Westminster leader Ian Blackford and his Barmy Army of SNP MPs threaten 'maximum disruption' at Westminster, rabble rousing all the rage at SNP Conference as they attempt to be relevant to Scotland, Blackford’s rant shows that Nicola Sturgeon’s leadership and team cannot hold back the tide of change for the UK 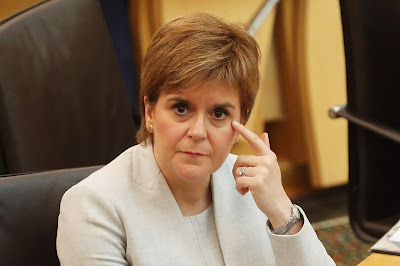 The echo chamber of the empty threat, the SNP in the shape of Ian Blackford has decided to look for trouble down at Westminster, the aim of this tactic is supposed to cause “maximum disruption” to the UK government’s programme in the Commons.

As we all know, the ‘grievo-max’ SNP at Westminster so far has been limited to clapping (each other), talking out the rear end, wasting time asking pointless questions and of course highlighting ‘issues’ to push their agenda.

The SNP Conference is in full swing, it is a time for rhetoric, for grandstanding, for stoking up the natives, and what better way than to punt the notion that  is being treated badly. Ian Blackford told delegates at the SNP conference that his 35-strong group would not allow  to be treated as a “second class nation”. Having been primed up for action, the delegates are supposed to have fire in the belly to go out and campaign for indy.

Reality is they are seen as a form of cheap labour!

But the gullible in the SNP are missing a key piece of information, Nicola Sturgeon isn’t going to deliver a second Scottish referendum anytime soon; and to highlight that fact, she is backing a second vote on Brexit to buy time.

Of course there isn’t going to be a second vote on Brexit, the so called ‘people’s vote’ is nothing of the sort, it is the elite’s vote. Even Bob Geldof has crawled out of the woodwork to pitch up a scare story about music industry being threatened by Brexit.

Bob Geldof famously delivered his ‘fuck you’ gesture to the working class by flipping them the V sign while sailing up to them in an expensive private yacht.

In the past, we have seen the SNP disgrace  down at  both in the chamber and also in the bars.

Here is an example of these clowns alleged behaviour:

“Standing on chairs in Parliament’s Sports and Social bar, a band of portly gentlemen are bellowing out Scottish folk songs. A young barmaid, only in her early twenties yet a seasoned veteran when it comes to turfing out unruly  soaks, approaches a new SNP MP and politely asks him to pack it in. Words are exchanged. Multiple witnesses allege a drunken ‘f— you’ is uttered. Defeated, the barmaid retreats behind the bar to mocking male laughter. So upset is she by the incident, she will leave her job a few weeks later”.

The real problem will be what these people do in the Chamber of the Commons and in Committees, usually this is limited to cheap gimmicks like clapping or being out of order and then being put out by the Speaker. How many times do you have to walk out the Commons chamber before everyone regards you as an arse? Previously Blackford and the other SNP MPs left the chamber during Prime Minister’s Questions in protest over a ‘power grab’ on devolution caused by the EU Withdrawal Bill, it was a stunt that achieved nothing.

What Blackford doesn’t realise is the obstructionist tactics don’t equal good PR, which is why 56 SNP MPs are now 35 SNP MPs, failed tactic that had consequences, to repeat it may give short term happiness but when you have a mortgage, you might find that acting the clown causes long term pain.

“The Tories think they can do whatever they want to  and get away with it. Well they cannot. Thousands of people joined us the day that the SNP walked out of  to show the Prime Minister we will not have our parliament, our people, our country disrespected.  will not be treated as a second class nation. We must act to protect our parliament and ’s voice. In , your SNP MPs will do all the we can to protect devolution. Let those in  hear this. If contempt continues to be shown to the people of  and to our parliament, SNP MPs will not hesitate in causing maximum disruption to the Tory government’s agenda when and where  needs us to.”

What the SNP want is continued EU membership, their stance on wanting single market and the customs union is not a viable position, it is a tactic which will go nowhere. The SNP doesn’t have the votes and support to change anything, they are hoping for a political miracle, but that ain’t happening.

In what must be delusion, Blackford said:

The Conservatives don’t need the SNP votes, never did, never will in this Parliament, the SNP are in no position to bargain, they aren’t being offered anything, and despite screaming in the corner, they are generally ignored or treated with contempt, which they have richly earned.

No one in  voted Conservatives, Scots didn’t vote for Brexit?

There wasn’t a ‘Scottish referendum’ on Brexit!

Finally, to return to the start of the post, SNP leader Nicola Sturgeon is attempting to buy time, not for Brexit, not for indyref 2, purely for the FM salary. All the hot air that Sturgeon and others spout at the SNP Conference is more like a mutual support operation because the Nationalists are on the side. Their Brexit campaign much like their Brexit referendum campaigning, a sham, Nicola Sturgeon cannot hold back the tide of change, much like she appears not to be able to hold back her pot belly stomach. It is hanging out like the stuffing on a burst couch!

George Laird
The Campaign for Human Rights at
Posted by G Laird at 2:15 PM

The don't like democracy, do they!. They want another indimince referendum. Now they want another European referendum. SNP ignoring 500.000 Scots who voted Yes in the 2014 indimince referendum but voted Yes to leave Europe 2016. Are these people insane? Why is the SNP acting so irrational. How could she possibly win another independence referendum with these crazy figures. I've never known a time when politics in the UK but especially in Scotland have gone so off the rails and mental. These political elites are just going over the top now.

Have you ever considered about adding a little bit
more than just your articles? I mean, what you say is important and
all. But just imagine if you added some great
photos or video clips to give your posts more,
"pop"! Your content is excellent but with pics and
clips, this site could undeniably be one of the
most beneficial in its niche. Terrific blog!

When someone writes an piece of writing he/she retains the thought of a user in his/her mind
that how a user can be aware of it. Thus that's
why this article is great. Thanks!

Way cool! Some extremely valid points! I appreciate you writing this post plus the rest of the site is also really good.

The Natzies and especially Wee Jimmy are doing nothing more than buying the time to hang onto their lucrative salaries. A five-year-old can work out that should they have had their way in 2014, that Scotland would already be out of Nippy's beloved EU

I've been exploring for a little bit for any high quality articles or weblog
posts on this sort of area . Exploring in Yahoo I eventually stumbled upon this website.
Studying this info So i'm happy to express that I have an incredibly good
uncanny feeling I discovered exactly what I
needed. I such a lot indisputably will make certain to don?t forget this site and provides it a look
regularly.