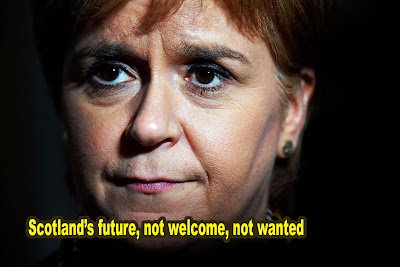 You may remember a few posts ago that I wrote that the Yes Movement would eventually have to split from the SNP. However the question remains have Scottish Independence Convention gone their own way or is their new idea of a campaigning body just a sham?

Have the grassroots activists who support independence came to realise that Nicola Sturgeon isn’t going to lead them to independence and neither is the SNP?

It was always on the cards and plain to see what was going with Nicola Sturgeon, she was buying time, not for independence support to rise, but for her to hang on to the post of First Minister.

Today we see that the cross-party Scottish Independence Convention (SIC) have launched a new campaign for Scottish independence. Although the organisation is cross party, it isn’t supported by Labour, Conservatives or Lib Dems. The purpose of the new campaign launch is to get a fundraising appeal on the go for a non SNP organisation aimed at driving support for a Yes vote over 50%. They want to make it cleat this is a separate entity from the SNP.

has left the SNP behind, they are no longer relevant; an example of this is Nicola Sturgeon’s Brexit plan.

No one in is listening to her; or her party or whatever input they put forward, Sturgeon is talking to herself, she isn’t a power player in Brexit. She isn’t on any team; her advice isn’t welcome and isn’t sought.

In short, she might as well be howling at the full moon!

If the public stump up the cash, the new organisation is supposed to provide “front-foot media handling, strategic support, resources, messaging and the administrative capacity” to help persuade No voters!  Given the extensive nasty campaign of 2014, no one is in any doubt what the Yes Movement is all about.

It is also said that the new body will bypass SNP ministers to “develop strategy”, undertake public opinion research, and develop “messages and campaign materials for the movement”.

Before you get carried away, you need to look at this page.

Basically as I previously blogged, the independence movement is repackaging itself, but the problem is, it is the same people, which is why I wanted you to look at the above link.
People aren’t buying what the SNP are selling, people aren’t buying what the Scottish Independence Convention is selling so they think this new body will make a difference……. because it is new!

Has anyone ever told them that it doesn’t work that way, new clothes on a pig doesn’t make it a swan!

At the SNP Conference, Nicola Sturgeon downplayed independence and used the smokescreen of Brexit to buy her time up till 29 March 2019.

One thing which was a problem for Yes which I commented on at the time was it was ‘run by the SNP, staffed by the SNP, for the benefit of the SNP.

There were a few Scottish Greens and SSP to pad it out. Yes Scotland Ltd remains a mothballed company under the control of an SNP lawyer. During the campaign of 2014, the other minor parties complained about how their views weren’t heard at Yes Meetings, and that speakers were SNP. As well as indy campaign, the SNP used this as a vehicle and platform for their candidates.

One thing of interest, the new body would provide a “rebuttal” service which is something which the SNP said they were going to do.

Is it a coincidence or just a lack of imagination on the part of SIC?

THE SNP launched a new “fact checking” service designed to refute claims made by political opponents.

“The dream of for has been kept alive by all the various groups who keep working, campaigning and marching. Now we’d like to get an official campaign up and running to allow us to help organise further. At almost every meeting or event I have attended over the past four years I have been bowled over by the self-organising and work that is going on across the country. However I am always asked about a central resource that can distribute and communicate what’s going on with all the other groups. That’s what we aim to try and provide.”

When you look at some ‘various groups’, you see that they are run by SNP members, this is the illusion of ‘board’ support that doesn’t exist.

“I am delighted with this initiative. I have a burning desire to see a fairer and wealthier and the delivery of an inclusive open society - independence offers that opportunity. We need to inspire the people of to come with us on the journey to independence. “Locally Yes Skye, Raasay and Lochalsh are showing the leadership and engagement that is essential in growing the level of support for independence.”

I would say one thing about what Blackford said….. Charles Kennedy!

Isn’t there a lack of destiny about these people?

“I was under the impression that there was already an organisation devoted full time to campaigning for Scottish independence and it was this Scottish Government. The SNP's own Growth Commission admits that independence means years of cuts to public services.”

Pamela Nash, chief executive of the anti-independence group in , added:

“The nationalist movement will never stop campaigning for a second independence referendum, even though the majority of people in want to move on from the divisions of the past. Rather than spend time setting up an organisation in the hope of creating more constitutional chaos, most people would rather there is a fresh focus on improving schools, our NHS, and the economy.”

Having failed to deliver Scottish independence in 2014, the Yes mob licked their wounds, took defeat badly, and have been plotting and planning ever since; this new body is going to be drowned out because it is too small. Who exactly will they be providing strategic support too, ever had a Scottish Independence Convention leaflet pushed through your door?

The SIC new body might have meetings, stalls, launches, relaunches etc etc, but they are and will be a hollow shell, pretty much a paper organisation which would struggle to mount a ground campaign. Nicola Sturgeon has the full resources of the Scottish Government and she sees her support falling, what chance has this lot got?

Repackaging the same broken product that the public rejected doesn’t sell, there is no great demand for a poverty stricken independent .

George Laird
The Campaign for Human Rights at
Posted by G Laird at 3:07 PM

You should watch indycar if you like bonkers, it's addictive in its madness.to these people the magic money tree exists.

So it seems that the indy movement is splintering.

SNP are no longer a Scottish nationalist party. They are the European party.

Do you think there will be another referendum?