Help Wanted: Labour leadership race flounders as both candidates struggle to offer a vision that resonates with the public never mind their own members, Scottish Labour needs to set reset party direction, lack of vision and new ideas dominate a contest the public don’t care about, ‘retread policies’ and ‘jobs for the boys’, wow, I am impressed 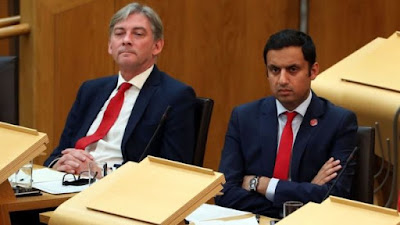 There is a battle going on in the Scottish Labour Party, however it isn’t a battle that has captured the imagination of the general public.

The general public don’t care; they are getting with their lives; for them there is complete non interest in this ‘soap opera’. In the one hand, we have privately school, privately educated ‘millionaire’ Anas Sarwar whose family don’t pay the real living wage, and in the other corner we have Richard Leonard who has a trade union background but little political experience.

In this contest, we have already seen Anas Sarwar not afraid to trot out retread policies such as getting every young person a job, training or more education. You might have thought that Anas Sarwar could have come up with a better platform.

The new lot called ‘Momentum’ or the ‘Campaign for Socialism’ is against the Blair faction, they brought the Labour Party to its knees by refusing to help the people that they were elected to serve. So, the public is offered the ‘Momentum choice’ which is connected to the leader Jeremy Corbyn. People in are asked to believe that if they voted in 2017 for Labour, they did so because of Jeremy Corbyn.

I don’t know about you but this is bollocks.

In , the Labour Party did well because the people are rejecting the SNP, not because they have a vision.

As Kezia Dugdale said the Labour leadership race offers opportunity to reset party direction but ‘we need new ideas’. What is interesting about this statement is that Kezia Dugdale had ample opportunity to do this and failed. Kezia’s time as leader was dogged by bad judgement and done publicly, if there was a losing horse in a race, Kezia backed it 100%.

Another aspect of Kezia Dugdale’s leadership was the focus on minorities apparently the working class were ignored in favour of LGBT and Muslims, which is why the working class switched to other parties. That being said the SNP has gone the same route, their focus is on minorities, they favour LGBT and Muslims which is why they are sinking as well; however we must not leave out incompetence which is a major feature of the Nicola Sturgeon administration.

The year is 2017, man has been to the moon, technology has advanced dramatically but still the working class haven’t been able to advance in society whether it be employment or education. There is a glass ceiling most notably in education, opportunities and social mobility in this country.

If I wanted, I could have paid £12 to vote in the Labour leadership contest, but I have better things to spend my money on, in a recent by-election for Scottish Labour, I was asked to join their campaign but I didn’t want to after the way I was treated people in Pollok CLP.

One thing which the Labour Party has lost is their moral compass to refine new policy, they lost it years ago, a classic example was the Westminster 2015 campaign led by Jim Murphy who was quite gushy about presenting working class people with crumbs and expected them to be satisfied with that offering.

I have to say my only interest in the 2017 Scottish Labour Party campaign is the two sides knocking lumps out of each other over the last couple of weeks. Kezia Dugdale says that has been pretty sad.

Kezia left office in a hurry, she only told her deputy a few minutes before she quit, I think that is pretty sad and shows the type of leader that Scottish Labour is producing and expects people to follow and vote for. Her act of leaving was her choice but the damage she has done has been of the same calibre as Johann Lamont when she left the party in the lurch.

What should have concerned Kezia more was the absence of any new ideas in Scottish Labour for decades.

Ask yourself this question, if these people want to make people’s lives better where was their private members bills while in opposition?

How many private members bills have Scottish Labour brought forward to the floor of Holyrood since 2007?

This is the shit that passes as the pressing social justice issue worthy of debate:

Are you feeling short changed?

Do you now ask yourself; is that it in Scottish politics?

When you read this story:

Don’t think about the Labour Party member getting promoted; rather think about everyone else who was tossed on the scrapheap. The key point of the article is ‘politicians had commissioned 18 different reports into the lives of people like her and nothing had ever changed’.

In 2017, there has been little real change over decades; the real winners in society have been the politicians and their hangers on.

How many times have you seem politicians spend time, your money and little effort to campaign on an issue that they cannot change or do little about?

Basically, we, the people have had the piss taken out of us, and at each election we have been asked to vote for these people not to represent us but to continuing enjoying their middle class lifestyle.

Kezia’s is saying her vote is up for grabs:

“If either camp want my vote, they'll need to say something fresh, new and relevant to the challenges ahead”.

She then goes on to talk about Labour ’s plans to increase the basic rate of income tax by 1p in the pound, she said it had one goal in mind,  tTo raise enough cash to stop any further cuts to public services.

Now, let’s stop there for a moment, she is the leader of Scottish Labour and her idea was not to improve just pitch an idea to keep the status quo. To quote Michael Howard, the Conservative, ‘are you thinking what I am thinking’?

Well, I am thinking what a timid weak minded luke warm policy which appears to be designed not for betterment but for winning an election. What is always missing in the increase tax debates is what will the money be spend on, it is always too vague and missing detail which is why it doesn’t sell as a policy.

Let’s take frontrunner Richard Leonard, he tells us that health inequality is the big challenge facing the country, no Shit Sherlock; however his plans to address this include a new ministerial post. If you don’t understand what that means, it means he plans to give a Labour MSP a job on £100k plus. And what will this person do, they will be looking at an audit to make sure the cash gets spent in the right places. How do we know that they are qualified enough to know where the right places are?

Anas Sarwar is doing retread policies and Richard Leonard wants to give a buddy £100k and I and people like me are asked to part with £12 to vote in the leadership contest?

Gulf between rich and poor is wider than ever as Scottish Parliament turns 20, Labour MSP Donald Dewar utter the words, ‘there will be a Scottish parliament’, what a disaster that turned out to be, the minor successes in no way outweigh the failure as a whole.

If Kezia Dugdale wants radical and new vision, then she isn’t going to find it in this contest, so far, all we see is an angry wee fight that the public are just stepping over as they get on with life.

George Laird
The Campaign for Human Rights at
Posted by G Laird at 1:55 PM

It's a disaster, George. No improvement in equality, no payrise, working class people often don't have the qualifications that the 'white-collar professional' middle classes possess. Are they introducing any suggestions for how to help them achieve? How to assist in people climbing on the work ladder? Are they balls! Maybe an initiative to start businesses and get on in the world? All Blair said while we were growing up was; 'Education, education, education.' What does that even mean?

Young people like me and my friends want to start living a life, but finding any work is a struggle, and then you can't earn enough to pay for bus fare, let alone pay for rent or mortgages. That's why people are living on food banks, people in their 20s and 30s still living at home, and the only solutions on offer are cuts, nationalists and populists (who often stir shit and spread hatred in their wake rather than help people), and the sort of socialism that recently crippled Venezuela. Oh, and corporate bosses that set us and immigrants on one another in order to compete for jobs, while they ruthlessly exploit us.

All we want are work and prosperity and the means to achieve that. I would chew off my right arm to have a candidate to vote for that offered that, something like the social democracy setup they have in Sweden or in Switzerland. I dream of someone who offers means to help raise up the working classes to better prosperity, to offer young people the sort of work that gets us enough to start a life, but as it is, all we seem to have are extreme right-wingers, Tories, red Tories (Blairites), and flogging-the-dead-horse socialists.

If they are listening to you, tell them from us that we are sick of it.

In Scotland it’s reached the stage that you vote for the party you hate the least. None of them seem to offer anything constructive. They all appear to be very similar. Our politicians are really just a bunch of upper class parasites playing politics for the sake of it.

Pretty nice post. I just stumbled upon your weblog and wanted to mention that I have
truly loved surfing around your weblog posts. After all
I will be subscribing to your feed and I hope you write once more soon!

Just underlines the irrelevance of the party I am afraid Mr Laird.

Our politicians are not only 'upper class parasites playing politics' they are carpet baggers who lack proper intelligence and believe themselves to be entitled to our respect and loyalty whilst treating us with disrespect and contempt. When Joan McAlpine MSP (Regional List) can claim on expenses for toilet rolls and go on junkets to Brussels with her Holyrood committee and staff then they are pushing us too far and the day will come when we all have had enough. Holyrood is past its sellby date.