Cry Baby Politics: Scottish Labour leadership contest is being "rigged" says Labour MP Ian Murray, he also wants interim leader Alex Rowley kicked off the chair of a panel set up to vet new recruits, this campaign letter tactic is rather squalid and counterproductive and doomed to failure 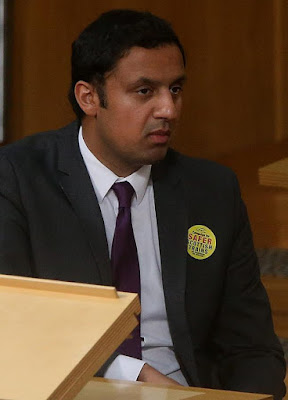 It seems there is unhappiness which has publicly emerged in the Scottish Labour Party leadership which an allegation that the election process is being “rigged” to help left-wing candidate Richard Leonard.

A few days ago, I wrote about the Sarwar supporters signing up Muslims to vote for a Muslim, in this case Anas Sarwar, the fact that race politics has emerged in this contest is appalling.

I wonder how , Edinburgh South MP Ian Murray feels about what I wrote about just recently, is there anything in his letter about new Muslim members joining with same email addresses and mobile phone numbers?

I would suspect not as Ian Murray is a known anti Corbyn supporter. In a letter to party headquarters, Edinburgh South MP Ian Murray called for Labour to re-consider the validity of the members of the Unite trade union who had signed up to vote in the contest.

Under the rules, the Unite trade union has done nothing wrong, and if you take the wider view then the Sarwar supporters have done nothing wrong in their ‘sign up a Muslim to elect a Muslim’. As to the people who were signed up by Unite, the union wouldn’t be holding their hands when it comes to the vote, these people will be free to cast a vote for either candidate.

Another interesting turn is that Ian Murray wants interim leader Alex Rowley kicked off the chair of a panel set up to vet new recruits, I doubt that would happen, and although privately Rowley expressed a preference for Richard Leonard, he is entitled to his private views.

So that request will be chucked in the bin, along with his letter, wrote:

“We are in danger of undoing all the progress we have made in the last year because the defence of the leadership election process is, at best, clumsy and, at worst, being rigged for a particular process.”

So, who exactly is doing the rigging for a particular process?

I joined up after the actions of Sarwar’s supporters because I don’t think their modus operandi sits well with; in fact, it leaves a bad taste in the mouth, and taints everyone connected to his campaign along with Anas.

Anas Sarwar called for the debate to be about policy after news stories about his personal life and family business practices became public, we have seen what his supporters are up to, is that about policy?

I would have thought someone has educated as Anas Sarwar would have recognised that a broader appeal base would have served him well rather than what has come to pass.

"Ian Murray is wrong. Unite has adhered to the SLP's rules to the letter, and indeed the general secretary and the party's legal and governance unit have all confirmed that our affiliated members are valid. We urge Mr Murray to take Brian Roy's advice on this and in doing so withdraw his wrongful accusations about Unite."

No luck there for Ian Murray.

I am sure that the rules do need to be reviewed in the Scottish Labour so that they reflect fairness and are appropriate to a modern party but this contest is running and the rules are the rules as they stand at present.

A senior Labour source described the letter as a “massive diversionary smokescreen” created to take attention away from the member recruitment strategy pursued by supporters of the other leadership candidate,  I would have to agreed with that, although Anas is in this contest to the end, it wouldn’t be a contest that ends in unity.

Not after the shit his supporters got up to, not only have they ‘queer the pitch’ for his campaign, they have also done it for themselves if any of them are elected representatives, who is going to be an activist willing to work for them.

This battle has become one of the dirtiest leadership contests in years, it didn’t have to be but this is how it ended up. Recently, I got an invite to take part in workshops for new members from someone called Kayleigh Quinn who is a Scottish Organiser, I won’t be going to these sessions as I am rather busy at present, whether I go to others will depend on how I feel, at present seeing what is going on, I am not impressed enough to offer my services as I did before as an activist.

Being a member and being an activist are two different things entirely.

Finally, Ian Murray's letter was a huge mistake, it damages the Sarwar campaign, not helped it, amazing stupidity on his part.

George Laird
The Campaign for Human Rights at
Posted by G Laird at 1:57 PM

All the suspect memberships should be scrutinised George. If they have the same email address and phone number I would suspect something rotten in the state of Denmark and suspend their voting rights till it's looked at. Speaking for myself throwaway email addresses are easy to set up as is the process of linking them to the one account for collection of any mail. It beggars belief that anyone could think that stuff like this would go undetected. Sometimes people are not as smart as they think they are.

I totally agree with what you wrote here.

Regardless of Sarwars past and inherited wealth. I would prefer him leader of the Lie@bour party. I don’t like both of them but I don’t trust that Leonard. This Richard Leonard is a privately educated career trade unionist - does that make sense? ‘The trade union movement betrayed the people they are supposed to represent by supporting Blair/Broon’ Leonard has never had a job in the private sector. All his working life he’s scrounged off the public sector public purse. He really is one of the entitled. As a centre right socialist I would rather have the millionaire than the fake trade unionist as leader of Scottish Lie@bour.

As a strategy it appears to have been badly thought out and executed to put it mildly.

Sarwar is at least a committed unionist. I don't want any Labour leader who is going to sell out and join the seps. Left wing Richard Leonard would help siphon votes from SNP/Greens - but that's no good at all if he ends up throwing his lot in with them.

The inherited wealth is not a problem the fact as a politician he is not wise enough to actually say to his family that not paying the living wage is bad press for me so even if it costs us money let's do it. That would have solved everything at one stroke especially if it had happenned before he decided to run. The allegations of tampering and loading the party with members if proven are well out of order I'm not a fan of the present leader of the UK labour party , as a member or any of his supporters but as george says he will never be PM . In fact if I'd been offered 50k I could have probably with no knowledge apart from what I know have done it a lot more untraceable . If we can reset the political and economic discussion a little more to the left rather than where it is now I would be happy.