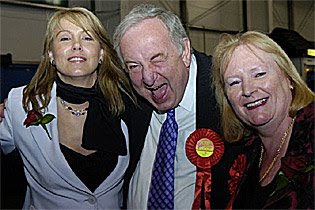 It is that time of year again, time for George Foulkes to cause trouble.

This time the noble Lord latest venture in stirring shit is a complaint to the Westminister sleaze Watchdog against First Minister of Scotland, Alex Salmond.

Foulkes has a history of wasting public money by asking a large number of parliamentary questions, the more meaningless the better.

Nothing is too stupid for Foulkes to ask the Scottish Government.

From Space hoppers to hairstylists, Foukles wants to know the cost.

Alex Salmond used of taxpayers' money in a bid to force Tony Blair from office over Iraq.

Last night, Foulkes was quick to crow Mr Lyon was to look into his complaint, which was limited to the First Minister "in the first instance".

In other words, this is a party political complaint against Alex Salmond, could it be something to do with the fact there is a by-election in Glasgow North East?

The SNP response to what Foukles is up to is that the Nationalist parties had been "absolutely" right in their bid to hold Mr Blair to account for the war.

That war was illegal, achieved nothing and destroyed an entire country which caused lasting damage to the West.

Foukles is one of the most expensive clowns in public life.

George Laird
The campaign for Human Rights at Glasgow University
Posted by G Laird at 4:11 PM