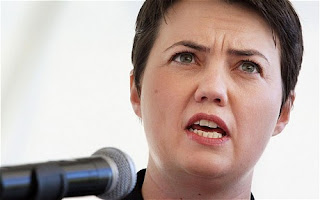 It seems that sectarianism is a hot topic at the present moment in political parties.

First we had the Sectarian Bill passed at Holyrood and condemned by all opposition political parties as crap legislation.

I personally would never have gone down this road regarding this Bill.

Next we had a former SNP MSP staff member called Mark Hirst who raises issues with his blog.

Interesting read so, I put it on my blog list.

Of the late Billy Wolfe, he calls him, “Willie Wolfe, "Bigoted and anti-Catholic.”

I think that is a fair assessment of the former SNP leader, my Labour Party friends who are Catholic despised him with passion.

They still think the Scottish National Party is anti Catholic.

Just elected and everything is all turning sour for her, she should never have been elected leader of the Scottish Tories.

Her new problem is Colin James Taylor, who is employed at the public’s expense in the Tory Press and Research Unit (PRU) at Holyrood.

What has he been doing?

Taylor is another Glasgow University product.

He referred to Celtic Football Club as “tims” on the popular blogging website.

And he is a Rangers fan from Belfast and a former president of the student Conservative Association at the human rights abusing Glasgow University.

I remember from my time at Glasgow University, the place wasn’t tolerant by any means, wretched is the best way to describe it.

On Saturday, February 19, this year he posted lines from a notorious song.

‘Here Lies a Soldier’, about a UVF member awaiting execution.

Although he did not tweet the rest of the verse, it runs: “And on my gravestone carve a simple message, here lies a soldier of the UVF.”

Educated and a bigot, there are many like him spawned from Glasgow University.

His twitter name is “Ulsterexile” if anyone wants to read his musings.

Most of his posts are about his time at the human rights abusing organisation are about the tat of uni, his studies, video games and football.

Interesting he says he was “called a bigot before”.

It seems that politics is a nasty game.

Because the press will probably go through everything, searching for more stuff!

As to Taylor, the Tories last night issued Taylor with a “formal warning”, but left him in post.

Ruth Davidson is a Glasgow University product the same as Taylor, so no surprises that he wasn’t sacked.

For the Labour Party, who have probably the biggest Catholic following in the West of Scotland, Labour MSP James Kelly said:

“This is an insufficient response. In any other workplace a person who be out on their ear for this. There needs to be a proper investigation and disciplinary proceedings.”

I hope James Kelly isn’t holding his breath of this issue, it’s going nowhere unless there is worse down the road.

A spokesman for the Scottish Tories said:

“The comments which appeared on Colin Taylor’s Twitter account predate his employment with the Scottish Conservative MSP Group in the Scottish Parliament. His comments were immature and inappropriate. The allegations against Mr Taylor have been fully investigated and he has been issued with a formal warning. Mr Taylor deeply regrets the comments and he apologises for any offense he has caused.”

The leadership job doesn’t seem to be working out for Ruth Davidson.

George Laird
The Campaign for Human Rights at Glasgow University
Posted by G Laird at 2:22 PM

I used to go to school with Colin and he was a bit of a bigot even then. But as far as I know, these weren't recent events and really, if every politician's past was exhumed by the media, it would make for a sordid telling.

If Billy Wolfe was such a bigot why did he marry a Catholic?

I think the vitriol of your Labour friends had a lot more to do with him being a nationalist than his sectarianism.

Funny how Labour politicians were always in favour of Irish nationalism but never Scottish.

Read this, this may educate you in regards recent scottish history.

I hope you find it helpful.

As to your defence that he married a Catholic woman, ergo, he wasn't a bigot, that is one of the weakest arguments I have heard in a long time.

I hope you aren't studying to be a lawyer, the thought of you starving to death because you are so intellectually poor would be a great loss to those who like people making bizarre statements.

Enjoy Xmas and have a happy new year.