Living the Un-American Dream; SNP leader Nicola Sturgeon says Scotland will be independent in five years, utter delusion, if Sturgeon is looking for job opportunities I can highly recommend a ‘high frying’ job, behind the counter of KFC post FM, her career prospects aren’t on the international Geo political scene, TV or academia but the scrapheap 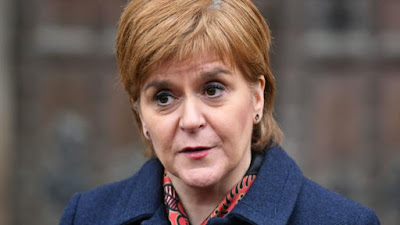 You might reply to that question; that Nicola Sturgeon isn’t going to be delivering a second Scottish independence referendum in this term of the Scottish parliament and with the serious prospect of a hung parliament post Holyrood 2021, there will be a lot of angry Nats about. Yes, as in normal in SNP politics, someone will step up to stab Nicola Sturgeon in the back politically, telling her she needs to go for the benefit of the independence movement. Ex politicians when their careers peter out sometimes hop off to industry or academia or set up their own business. Given the history of failure in politic office by Sturgeon, no one in business will take her, academia is out of the question, and as to setting up her own business, don’t see it.

In such a situation what is needed is someone gullible, someone who doesn’t know the real Nicola Sturgeon, someone who hasn’t seen behind the fake persona.

What she needs is a mug or a collection of mugs that are looking at Nicola Sturgeon with rosy tainted glasses.

As part of her tour, Nicola Sturgeon said on CNN current affairs show Amanpour & Company that Scotland will be independent in five years. Sadly our hillbilly cousins in the US aren’t up on Scottish domestics politics too well as they would realise that Sturgeon was trying to sell them a pup. Although politicians use aspiration, the future for Sturgeon is ‘political asphyxiation’, the oxygen is being sucked out of the Sturgeon government leading to it withering and dying, a long slow death.

Having made a clear bizarre claim; Sturgeon decided to add to it re the EU by saying:

“I would love to think so and I think it will. I’m not going to put a particular timescale on it right now but in the not too distant future, I think Scotland will be an independent country looking to join the EU and looking to take a seat the United Nations.”

The World is global but for Nicola Sturgeon, the World in terms of opportunities is shrinking, ex SNP leaders don’t go on to do well post political career. They are like some Asda products that are on permanent ‘rollback’. Nicola Sturgeon in this tour couldn’t have failed to notice that she isn’t a statesman, the more she travels abroad, the more that message must sink home to her.

The SNP banked on Brexit working in their favour which although they said they were against it, they wanted a crisis, a lever to say they needed a second Scottish independence referendum. They never really campaigned against Brexit and they never spent the money to stop it. To say that Brexit would have a significant factor for her plans and she was confident that more Scots would back independence in a referendum is wrong, people, ordinary people in Scotland have accepted Brexit and that we are leaving, that is the reality.

“We’re in this position because we’re not independent”.

Fighting to be independent and then wanting to sell out Scotland to Brussels, what is the point of a party which claims to want to live in an independent country only to give control to un-elected bureaucrats?

“That democratic deficit, that Scotland faces as being part of the UK, undoubtedly makes many people want to look again at the issue of Scotland becoming an independent country. I think there will be another independence referendum. And when that happens, I think Scotland this time will vote to be independent. It will be a way of us protecting our place in Europe and make sure the decisions that influence the direction of our country are taken in Scotland not in London. The timing of that is yet to be determined - obviously, there is a lot of concern about the Brexit process. As First Minister, I’ve said that I will set out my view on the timing of another independence referendum in the next few weeks once we see how this Brexit process plays out.”

The only thing which Nicola Sturgeon has played out is the false act that she and the SNP are relevant in the UK and in Scotland.

Oh and before we all demand our taxpayer money back for this trip, Sturgeon said that Scotland remained "opened for business".

And she also said:

“It’s no secret that I’m not aligned politically with the current president of the United States. We disagree on many things. But Scotland and the US have a very strong and long-standing relationship, and that relationship endures regardless of who occupies the office of president or of first minister”.

Anyone notice Nicola Sturgeon at the White House, or an invite to visit?

“The timing of my visit is more to do with developments in the UK. I want to make sure the rest of the world knows, not with standing Brexit, Scotland remains open for business. Scotland didn’t vote to leave the EU, that’s something happening to us against our will, but we want to make sure that other countries know that Scotland remains open and welcoming - we want to attract businesses and individuals to come and live and work in our country.”

Open and welcoming, presumably there is a visa attached to that thinking, we don’t have an open door policy.

The US visit by Nicola Sturgeon was attacked by the Scottish Conservatives chief whip Maurice Golden.

“Nicola Sturgeon took a week away from government business to bang the drum for independence, and that’s completely unacceptable. The First Minister was supposed to use this dubious trip to promote Scotland’s business and economy. Instead, she spent her time lecturing America about her selfish plans to break up Britain.”

Basically what I have been saying, it is time that there should be an inquiry to stop taxpayer money being used for political campaigning, it isn’t enough to say at some stage that ‘Scotland is open for business’ as a cover for independence campaigning.

Finally, in America there is a term called ‘redneck’.

In the case of Nicola Sturgeon it is apt, but Nicola Sturgeon isn’t just redneck material, she is also brass neck material, hoping that someone will pay her attention and look upon her as a serious political player. That strategy has backfire, Sturgeon is inward looking, she is a short term-ist; she isn’t a team player. If Nicola Sturgeon wants a piece of the American dream in terms of job opportunities, then I can recommend a ‘high frying’ job, behind the counter of KFC post FM.

George Laird
The Campaign for Human Rights at Glasgow University
Posted by G Laird at 1:34 PM

My spouse and I stumbled over here coming from a different page and thought I should check things out.

I like what I see so i am just following you.
Look forward to looking at your web page yet again.

Schmoozing to save her skin when it's already too late. Maybe she can find a new job as the fryerman on the frying scotsman.

You write so well. Please continue to helps.