Fixing Labour, steadying the ship; Labour Leader Jeremy Corbyn writes to members to say “Our opponents are the Tories, not each other” after seven Labour MPs quit, Deputy leader Tom Watson says more are ready to quit, the choice is simple, either make a deal or purge 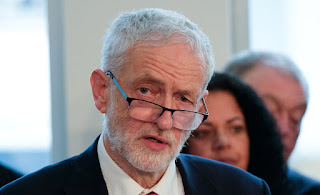 Here is an email which I got sent, I get sent emails from various parties but this one, I am sharing.

Seven Labour MPs yesterdays quit the party to form another group which now is polling 8% of the vote in a new poll if it becomes a party. In this email below, the seven aren't mentioned by name, their reasons for leaving aren't mentioned, and there is no real counter case for why these people were wrong.

If you have a problem, to me it makes sense to address the problem, rather than shifting focus onto someone else. The Labour Party has problems, but then so do other parties, but those problems need to be talked out.

Anyway, here is the email from Jeremy Corbyn, see what you think.

Our country is in crisis and needs a Labour Government.

Our opponents are the Tories, not each other, and it's disappointing that a small group of MPs have felt unable to continue to work together for the Labour policies that inspired millions at the last election and saw us increase our vote by the largest share since 1945.

Labour won people over on a programme for the many not the few – redistributing wealth and power, taking vital resources into public ownership, investing in every region and nation, and tackling climate change.

The Conservative Government is bungling Brexit, while Labour has set out a credible alternative, keeping all options on the table, including a public vote to stop a disastrous 'no deal' Brexit.

When millions are facing the misery of Universal Credit, rising crime, homelessness and poverty, now more than ever is the time to bring people together to build a better future for us all. For those millions the only solution is a Labour Government that will invest in and transform our country.

That's why we must be united – not for ourselves but to deliver a Labour Government.

Finally, will there be a second wave of defection, the question remains open but as leader, I would call a PLP meeting and attempt to fix this personally.

George Laird
The Campaign for Human Rights at Glasgow University
Posted by G Laird at 5:02 PM

To a certain extent George Corbyn and those around him are the problem. I don't know what he's being advised but a labour victory wont come from having a hard left perspective it doomed them in the 80's as they struggled to get rid of clowns like Hatton the same will be true in future elections as they try and get rid of the momentum crowd. As for the anti semitism that's truly abhorrent and has no place in any modern society and if this report is true https://jewishnews.timesofisrael.com/after-99-years-jewish-labour-movement-to-consider-future-in-corbyns-party/ the leadership of the labour party should be heartilly ashamed of allowing it to happen.

Jeremy must purge, flush the fake Lie@bours away and while he’s at it. Get rid of the fake trade unions too.

Oh dear lord. What a pathetic email. Corbyn is useless, he will never be PM. Lady Nugee or Emily Thornberry is a hypocrite, sending her kids to one of the poshest private schools, slaying private landlords but is one herself. Diane Abbott, well what can I say, talking as slowly as she can hoping her brain will come up with something. John McDonnel, is just simply vile, Marxist nonsense. These people could not run our country. Labour is fucked, Owen Jones sitting with a hard on every time he mentions the great JC and I don’t mean Jesus Christ our Lord.

In Scotland we have Richard bobbing about as if he has springs in the heel of his shoe, shouting angrily about something or other but never landing the killer blow. I can see more MP’s leaving the party. Corbyn clearly doesnt have a grip on the party and seems unable to ever do so. I certainly would never vote Labour it join Labour. Oh and let’s nit even go into the fat cat trade union bosses, on huge salaries. Us workers pay sweetly monthly union fees and they do sweet fuck all for us. I’ve cancelled my unison membership and saved myself around £20 a month. My Dad was a great union man, shop steward in a jute factory. He’ll be spinning in his grave hearing me say these things. I’m quite certain he certainly wouldn’t be proud of today’s lLabour Party.

I’ve watched Emily Thornberry speech at Broxtowe before the great JC himself came on. God what a nasty, spiteful butch she is. No much bloody wonder those MP’s have left. We be seen people saying there is no bullying in the Labour Party. Well just listen to Lady Nugee and it’s clear there is. She’s seeing herself as the next leader of the Labour Party. Tom Watson seems to talk sensibly about fixing the problems that exist and keeping the PLP together. Pity JC and posh pants have chosen to go duwn the road they have. Pretty poor show tbh.