Déjà vu in Europe; Prime Minister Boris Johnson will use first foreign trip to present Angela Merkel and Emmanuel Macron with Brexit ultimatum, if history repeats itself, then Boris will get the same reception as David Cameron got, non, nein, nada to everything, hard Brexit is our way out of the European mess 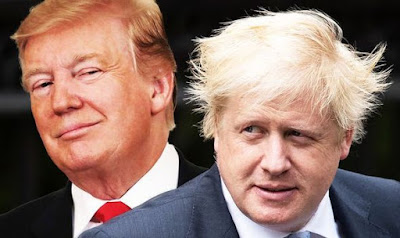 Think back to David Cameron as Prime Minister, he goes to Brussels to attempt to get 5 concessions which he hoped would make the British people vote to stay in the EU. Do you remember this, it was significant. The EU said no to everything, which made the former PM then attempt to move the goalposts to something else. The new goalposts also got knocked back which proved the whole EU adventure was to be a disaster. The EU had it in mind to punish the UK as much as possible and publicly humiliated it. The reason is simple, punish the UK and put fear into other member states that they will get likewise if they decide to leave.

The EU miscalculated the mood of the British people which as we know resulted in a vote to leave.

Boris Johnson as the new PM faces a hard task to leave the EU, external enemies abroad, political enemies at home, and even within his own party. The EU referendum did flag up one significant thing, the myth of representation. How many years have you voted for a party under the banner that you believe that they represented you and you believed that when they gave their word it has weight? Now, we find out that far from representing the people, there are some people in British politics who align with foreign powers over the people.

Boris Johnson will this week undertake his first foreign trip as Prime Minister to deliver an ultimatum to Germany’s Angela Merkel and France’s Emmanuel Macron: scrap the Irish backstop or see Britain leave the EU without a deal on October 31.

If David Cameron failed, then the odds of success by Boris Johnson remain highly dubious, since the 2016 vote, the EU kindest hasn’t changed, it has hardened; no deal but their deal is their mantra. I have always thought that hard Brexit is the only viable option that makes sense, why waste time trying to changed closed minds.

The clock is ticking towards the 31st October; that is the date we are supposed to leave, we should prepare for WTO rules and get on with it. Boris Johnson, if he fudges this will become a man with few allies, Brexiteers will not understand, and the only winner politically will be the Brexit Party. The Brexit Party maybe selecting Westminster candidates, but if there is a no deal Brexit, they lose a lot of their political meaning. Whether they then fold as a party is a matter for Nigel Farage, however, I suspect that they will end up hanging around at least until after the 2022 General Election for Westminster.

Boris is off to the G7 summit, a gathering of world leaders, but the man he is keen to talk to is Donald Trump, the US President, see him is a priority, interestingly he is seeing Merkel in Berlin before meeting French President Macron in the capital of France, Paris, the French much like the Germans are unwilling to compromise. No 10 expects there would be "very little discussion" of Brexit during the two foreign visits but other topics would be discussed.

Everyone knows where everyone stands.

The German Government apparently now accepts that there is a “high probability” the UK will leave the EU without a deal and that it is fully prepared for such a scenario. They might say it, but I don’t believe it, and you add into the mix a possible German recession, you will see a bit of internal German problems pop up. Germans aren’t going to like having to pay more into the EU especially when they are suffering. Such a scenario is only going to fuel the right with parties like AfD set to gain support. Merkel is on her way out, she is running down the clock until she leaves after her term, but she leaves office having made Europe weak, divided and with considerable social issues.

For now, both sides, the UK and the EU27, are digging in, who will blink first, well Boris can’t. The money tap is about to be turned off from the UK. When that happen Whitehall insiders believe that Brussels will blink when it realises that MPs will be unable to stop a no-deal Brexit. After the recess for the annual party conferences there will be less than four weeks to go before Brexit Day. Although Harold Wilson as former Labour PM said a week is a long time in politics, the 4 weeks to Brexit Day will pass quickly. There may be some drama prior to the date with a no confidence vote in the Government but that is expected to fail.

The numbers don’t stack up in favour of the Jeremy Corbyn plan, or indeed any remainer plan.

If the EU does blink, the key date is 17th October, at a European Council meeting, last change before the end. I think we could see them budge but attempt to use that as a time mechanism to give the impression of talks. This would be the tactic to encourage rebel MPs to mount another challenge against the UK Government as an attempt to wear the British people down. Boris Johnson must calculate whether any extension is worth the trouble, because extension doesn’t necessarily mean progress, there is no point in going on with a running extension, it only benefits the EU.

Finally, 31st October is Hallowe’en, a time where some people end up getting a fright, Boris Johnson needs to decide where he is going out with a ‘trick or treat’ scenario. If he is seen not to deliver a treat with hard Brexit, then the trick may be how he can stop a general election. The People Vs Politicians may throw up some unexpected surprises, and The Brexit Party at least down south may be in a place to be a power broker with seats, but they need an emotional vote by the British people to get those seats needed. The next Westminster election could be quite an angry affair.

George Laird
The Campaign for Human Rights at Glasgow University
Posted by G Laird at 3:06 PM

They've turned him down, looks like this is it, George!