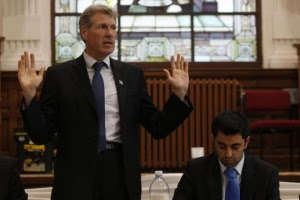 A few years ago, I went to Northern Ireland with a few friends, we went by ferry which was a bit of a novelty.

At the ferry, the Police stop us and asked us questions where we were going to, why and then searched our van.

It took awhile but given the terrorist problem in Northern Ireland and the problems of smuggling, we didn’t complain.

But it was a pain because the initial thought was ‘why us’.

Now, Muslims in Glasgow are unhappy about the way they have been treated at the city’s main airport and say they plan to boycott and fly from Manchester.

They say this is because of perceived harassment from counter-terrorism officers.

The allegations were made at a public meeting attended by Justice Minister Kenny MacAskill.

He turned up to discuss concerns held by parts of the Asian community that powers held by police, ports and immigration officials to question travellers at travel hubs were being abused, with travellers singled out solely on the basis of their race or skin colour.

In other words Muslims are implying that police, ports and immigration officials at Airports are in effect racists.

That is a disgusting suggestion that these public servants would act in such a manner.

And is typical of people who seek to further their agenda using race, I have absolutely no time for people or politicians who do so.

Justice Secretary Kenny MacAskill told around 70 people at Pollokshields Burgh Hall in Glasgow that Schedule 7 of the Terrorism Act 2000 was a necessary tool in fighting global terrorism.

And he is right.

He did however admit that there had been occasions when the powers had been used inappropriately.

And if this is the case then people who have been treated badly have a mechanism to complain and should use it.

Kenny MacAskill also said it was not deliberately used to target people because of their ethnicity.

Englishman and race lawyer Aamer Anwar said some Muslims had become so disillusioned at the way they were treated at Glasgow Airport they decided to take their business south of the Border.

I find that hard to believe.

I remember Anwar from Glasgow University, his ‘career’ there could be described as being built on race issues.

He wasn’t popular by any means.

Anwar said he will challenge police to deliver statistics on how much counter-terrorism intelligence had been delivered as a result of questioning travellers at the airport.

That information wouldn’t be available as it relates to operational matters on how Police conduct their business and as such useful to terrorists.

“The questions are offensive, rude and intimidating in the way they are carried out. The police may like to claim they are collecting intelligence and they are like James Bond but I think they are coming across more like Austin Powers.”

The purpose of questions is to unsettle people and keep them off balance; some people then give away information which they rather not want to.

And people have the right to not reply to such questions.

Anwar highlighted the case of one Afghan man living in Glasgow who returned from a trip home to be asked by officers if he knew Osama Bin Laden or had ever visited the Tora Bora mountains; where the al Qaeda leader hid out.

And yes, some people who do get employed could be characterised as not the greatest thinkers of our time.

Some people let power go to their heads.

“It seems as if there is racial profiling going on at Glasgow Airport and what the people from the community are doing is using Manchester Airport and other airports to fly out. Everything is not fine at Glasgow Airport. People do not accept the way they are being treated. They are not terrorists and they expect to be able to go about their business.”

If they entered by other airports then possibly they would be questioned, this is not a Glasgow problem.

It is more a problem of some people wanting special treatment and then thinking they are going to get it.

Ali Khan, a 32-year-old British Muslim living in Glasgow, said he had been questioned at Glasgow Airport for one hour 20 minutes after returning from a trip to see his family in India.

“I don’t have a problem being stopped if the police are doing their job properly but being stopped at random seems to have little to do with intelligence gathering. They photocopied my bank cards They asked how many times did I pray and if I knew anyone in al Qaeda. You start to lose trust in the police system.”

Reports suggest ethnic minorities are 42 times more likely to be stopped under Schedule 7 at UK airports.

That is because there is an identified problem with Muslim terrorists who operate in countries such as Pakistan, Saudi Arabia, Yemen and other areas of the Middle East and beyond.

“It is quite clear incidents do occur that I think are inappropriate, and I regret that, but there is a reason and logic behind them (the use of powers). People do have to be questioned about where they are going and yes it is not going to be me, it will probably be someone else from the Pakistani community given the nature of the flights and where they are going. What we have to do is get the balance right so that the people are asked questions that don’t insult or inconvenience.”

When I was held up at the ferry, I didn’t bitch and whine about it because I knew what the reasons for being stopped where. It was to protect the community from terrorism and keep safe our borders.

If people feel they have been badly treated then they should put in writing a proper complaint and anyone who breaches professional standards should be called to account.

And if people take the time to watch the series UK Border Agency and other such programmes then they would realise that policing our borders is a serious issue not to be taken lightly.

And if people think they can play the race card and expect us to investigate they are sadly wrong.

I have absolutely no time for people and politicians who engage in race politics to promote their own agenda at the expense of the entire community.

I think people in politics know only too well those who are involved in race politics for personal advancement.

It stinks, I wouldn't give these people the time of day.

George Laird
The Campaign for Human Rights at Glasgow University
Posted by G Laird at 5:42 PM

George, I didn't see any Chinese, Thai, Cambodian etc nationals at this 'conference'.
Surely the above are Asian and the conference attendees are... what?

The terrorism has nothing to do with muslim terrorists or any other terrorists for that matter. 911 and 7/7 were government atrocities - go check out the facts and open your eyes. Dr Judy Wood has proved that the Twin Towers and Buildig 7 were turned to dust on 911. All the evidence is in her book "Where Did The Towers Go?".

In the US they are now setting up road blocks and having invasive body serches on everyone inluding babies. Also in shopping malls etc. Is the entire population of the US terror suspects?

The real terrorists are the ones in government scaring the population so they can do what they want. Terrorism is the new bogey man since the collapse of the USSR.

It's not the first time this has happened George...

Needless to say it was thrown out of court and Mr Anwar warned about his future conduct...

Its really quite simple...they shouldnt have tried to blow up OUR airports....